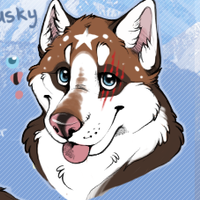 North is a delivery boy, well he'd say delivery MAN, but you get the idea. His owner has trained him to deliver small packages and letters to various more secluded places in the more northern areas of Alaska and some of Canada. It all started when his owner couldn't find a decent way to send a package to a friend and used North to get it there, then others started asking if North could deliver things for them as well and boom! North's delivery service began.

Now North has a family of his own that helps him continue to deliver packages and letters though different areas. If he hadn't met Sailor, he probably wouldn't have been able to contiune on his own, but with her help and their kids help North's delivery service is expanding it's range and can deliver more than ever before!

North is a pretty serious guy, but does have a nice sense of humor and can be very gentle when needed. He loves his family dearly and would give up everything to protect them. He's a great leader and does very well in showing his pups the ropes of how to avoid dangers and protect themselves. He's still a doting dad though and always worries about them when they're out and about. Before meeting Sailor and having his pups though North was a grumpy boy who just got his job done then brushed off basically everything else life had to offer. He didn't have anything else to live fo so he did nothing. Sailor has definitely softened the old boy up and made him a new dog.