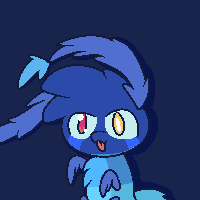 Nott is Marispiegel's vassal, and a minor character who resides in Badcadia's village of hope. She is the first creature from Badcadia that the prince will encounter. She can usually be seen as an oddball to the children of the village of hope, and, in contrast with them, she has a free spirit, and can do whatever she wants. As she is one of the lucky few that aren't affected by the law that Lux placed in, she can go out of her home as she please. Upon the prince's arrival, she greets to him, and introduces him to the realm of Badcadia. She was sent by the guardian of the village (Marispiegel) to find him in the nearby forest. Although she is usually shy towards humans, she seems to be comfortable whenever the prince is around.

While the prince was viewing a statue on the fountain, Nott meets him again in the village of hope, and explains that the statue is actually that of Marispiegel, and shortly after, she guided him to Marie's house. After rambling about Marie and introducing the prince to her, she was not seen again until the mimets arrived and attacked the village. She was cornered at the time when the prince rushed in to save her. After the prince cut the remaining mimets in half, Nott thanked him for saving her in the nick of time. Shortly after the invasion, both her and her fellow vassal Matsuki waved goodbye to the prince, as he smiled back, and once he departed from the village to begin his journey, Nott headed back to Marispiegel.