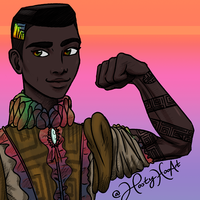 Hodgepodge gets that nickname because they are a changeling and can be a whole "hodgepodge" of different people if they want!

Later discovered this fact the king and queen decided they would search for their long-lost daughter but, keep "hodgepodge" raising them as their own.

"Hodgepodge" was raised to be a gentle princess but was interested more in the more dangerous aspect of life ADVENTURE.

Becoming bored with the tedious teachings of the knight's guard found a tutor in an unusual ally, a Goliath from the mountains, teaching the strength of harnessing RAGE.

Now "Hodgepodge" has sought out on their own looking for their long-lost sister.