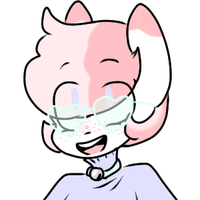 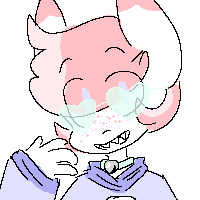 Impulsive, emotional, and energetic, Wage can be hard to keep up with. He always seems to be chasing something big, something huge - a beautiful, symbolic cause larger than him, larger than life. He struggles to stay in any one place for too long, struggles to settle for anything less than perfection, and seemingly never stops being unsatisfied with every aspect of his life. If he wasn't desperate to find kindred spirits, he would've disappeared into the wilderness millennia ago.

Currently, he works as the deputy of the Haven and as Sundae's confidante - his support, his dedication, and his right hand in everything. Wage fully, truly believes in the Haven, both as a concept and as a place. On top of that, he's completely enamoured with Sundae - finding the other to be a shining example of the worldchanging idealism that Wage so desperately wants to be a part of. Sundae, Wage feels, elevates him from his pathetic upbringing and background into someone who can help shape the universe into something better.

Born to TImeline AA-91, Wage seemed doomed to a life of inadequate mediocrity. AA-91 was an expressly empty Timeline, with very few Gladar, comprised mostly of a massive Magninium ocean - the perfect breeding ground for more Fragments. Wage's first few years were spent wandering around the scattered archipelago, looking for anyone else.

It wasn't long before Xiphisternum emerged from the ocean. Wage found the other quickly and they hit it off fairly well, bonding over a mutual drive of curiosity and exploration. It was nice, Wage surmised, to have someone to talk to, a partner to share ideas with, a sounding board to bounce concepts off of. Xiphi filled his need for socialization, and for a while, they were happy.

More and more Fragments slowly emerged from the ocean, until Wage had quite the small family toddling after him. Together, they helped construct a small village on one of the islands - under Wage's direction - to serve as a hub for new residents. Wage surmised more would show up - the ocean covered the majority of the Timeline, and everyone would need a place to stay, yeah?

But as time passed, restlessness took over his head. He was going to be stuck here, forever, doing patrols of the ocean, building another house for another Frag, doing nothing else. He wasn't even sure what else out there existed, but there had to be something, right? He had a deep, burning feeling that the world was just out of his reach, and it was driving him crazy even though he couldn't conceptualize anything outside of his Timeline.

He raised his siblings, quietly, resolving their small conflicts and helping teach them how to run the village in his stead. The sensations of unease had been building for too long - if he couldn't find the world, then he'd just run forever in his, living among mortals, doing whatever he could to shake off the stifled feeling that clung to him. There had to be more, somewhere out there.

And then one day a COR operative showed up.

They were all polite and smiles, explaining they'd found his Timeline and were offering for it to affiliate with them. It'd get a designation, and Wage could come visit the headquarters whenever he pleased. They'd come and check up and see if the Timeline was doing okay.

Despite his siblings' misgivings, Wage jumped at the opportunity. He spent the next several weeks at the COR headquarters, receiving his designation from the workers, talking to the Overseers, meeting everyone and everything. In all the excitement, one thing stood true: he'd been right. There was so much more of the world, so much more, and here it was, waiting for him to grasp it. He was made for great things. Lady luck herself had gifted him the universe on a silver platter.

Wage seeked out the operative who had found him. Coincidences weren't real, after all. He'd longed for a massive world to stake his claim in, and he'd been handed one - by this man. It only made sense to connect with him, right?

Turned out that was harder than expected. This Frag was a bit of a recluse, rather shy and disappeared after work hours. But Wage would not be dissuaded. He couldn't be, now. Riding the high of his eagerness, he followed the Frag home one day and demanded to know their name.

Sundae attempted to abandon Wage soon after, taking on several missions, but Wage's confidence was already solid. There was no escape. Wage always seemed to appear, no matter how far Sundae went, no matter how dangerous the mission was. They were soulmates, they had to be. Sundae had changed his life.

Wage rarely visited back home. It just didn't seem to matter as much, in the face of all this beautiful world laid out in front of him. He still loved his siblings, but they were just... average, normal, his baseline. Everything in the COR was exciting, everything he did here was mind-boggling. He never wanted to go back.

Some of his family followed in his footsteps and properly joined the COR, but Wage didn't bother touching base with them. He didn't want to think about AA-91, the chains that had once held him back, the forgettable Timeline whose only notable feature was generating more Fragments.

Sundae warmed up to him, relaxing in the other's presence. The two talked at length - Sundae was much more worldly than Wage, having joined the COR before him and befriended a few Overseers, himself. He was a man of big dreams, idealistic dreams, which stirred the restlessness within Wage once more. They were kindred spirits, kindred soulmates. They would both reshape the world in a beautiful, protected image.

Wage was there to support Sundae through his Overseer invitation, and then later through his Blessing. They were close friends, closer than either had ever held anyone before. Their bonds strengthened, supported by each other's loyalty and dedication to one another. No matter what, they'd have each other. They'd never let each other down.

So when Sundae disappeared into the clutches of Rendgen, Wage broke.

He went home. He didn't know what else to do. Jubilee himself had said that there was nothing Wage could do, nothing anyone could really do. He'd handle it, he'd said, to the best of his ability, but hold off for now. And where else did Wage have to go? He'd stayed with Sundae all the time at the COR.

His siblings were excited to see him again, eager and exhausted of 'leading' without him. Wage tried his best, but everything felt so much more fake, like everyone and this Timeline were made of cardboard. It didn't compare. He couldn't talk to his siblings about the world like Sundae could. He couldn't go on elaborate missions to free rare artifacts, or collect rare information, or explore the fabric of reality itself. The idea of staying in this Timeline any longer, doing homely domestic work, made him suicidal.

It was only a week before he received a ping, a tiny ping, from Sundae. He was back at COR headquarters. He had been freed.

Wage disappeared that night, teleported in as fast as he could. The two were reunited, hugging desperately, and Wage could feel the sinking realization that he was in love. Deeply in love, more than platonic. He wanted to spend the rest of his life at Sundae's side.

Whispered into his ear during the hug were the plans of the Haven, a Timeline Sundae planned to create to protect Fragments. He'd been through torture with Rendgen. He wanted to do whatever he could to stop that from happening to anyone else.

Idealism appealed, love fostered, and emotionally overwhelmed, Wage encouraged him, and together they fled into the night. Neither wanted to stay in the COR any longer, but they lingered, recruiting other Fragments who had tired of their work. Sundae announced his intentions to the other Overseers, and they all teleported, disappearing into the pocket reality Wage's partner had created.

He settled into his new life eagerly. It wasn't the same as home - he could still recruit more Frags, and there were so many universes here, and Wage loved taking care of others (especially Sundae). He could be something more, here. He could change these people's lives for the better, protect them.

It was exhilarating. And he could barely remember his siblings.

Heyaaa I'm Wage! How are you doing? Still figuring out social media and stuff :)
I use he/him!

oh wow hahaha i really need to update my bio on whizpr don't i??

DEPUTY OF THE HAVEN 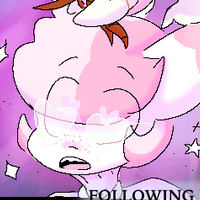 Wage has a reference sheet here.

Wage is brightly colored, with two-tone hair and soft pink markings on his body. These markings are somewhat splotched, located at the tips of his ears, hips, feet, and on the nose/cheeks as freckles. He can also have sharp teeth.

He always wears his bell collar and green glasses, which have a tint to their lenses. Most of the time he wears very little in the way of pants or skirts, preferring to go out in swimwear or underwear (due to "comfort", in his own words). Alternatively, he can be drawn wearing a very short miniskirt overtop.

Most of the time, he looks either excited, smug, or cheerful, often raising his right hand close to his face. He can be drawn alongside any Havenites, but closest with Sundae.

• Favorite color is cream
• Favorite season is Winter
• Favorite memory is first entering the Haven
• Doesn't eat, thinks food is disgusting
• Strongest sense is smell
• Strongest taste is bitter
• Ambidextrous (prefers right)
• Is ticklish in the ribs, feet, back of knees, and palms
• Favorite thing about Sundae is his aspirations
• Extremely high pain tolerance; can take torture that would break a weaker person
• Bell collar doesn't actually have a clapper, and doesn't make any noise
• Can tie a cherry stem in his mouth
• Not at all good at dancing, but dances like he doesn't care
• Also not at all good at singing, but is a little more shy about it
• Enjoys drawing "interpretive landscapes", aka abstract oil paintings of the Haven
• Didn't understand the concept of music for the longest time, until he found Sundae dancing to some
• Completely nonsexual to everyone but Sundae, leaving many bewildered when he ups the ante of flirting and sexting around Sundae