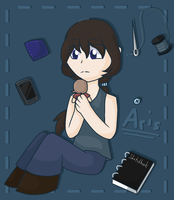 Name: Aris (last name never mentioned since not even he can pronounce it)

Sexuality: Not known, he might be some sort of lgbt

Ethnicity/Species: Human (Half German, Half Greek)

Hair Style: Brown and in a long ponytail that goes to his mid back. Down it's lower back since he keeps it in a low ponytail to keep out of the way during his work.

Body Type: Bean Pole with fingers straight off the crypt keeper according to him.

Dress: Either a faded blue lab coat or a teal tank top with cargo shorts. In art he often wears jeans but he doesn't when in serious work

Personality: Aris is very much socially awkward in a way that most of a fanbase could/would find endearing but he considers a major flaw to him due to not really being the best in the friends department back when he was a kid. He cares for his dolls way more than people because of his childhood and finds them to be the perfect lifeform due to them not being able to make fun of him or generally hate him. It's the best way he can think of to fill the loneliness in his heart. Also he tends to stutter or say not very correct things in terms of slurs, because he's very much awkward and not the most proficient in brain to mouth filters.

Likes: His more lifelike dolls, cuddling with his dolls, his precious "Samu", the gentleness of the rain and snow near his manor around winter

Dislikes: People walking into his secluded manor unannounced because IT'S NOT FUCKING ABANDONED DESPITE BEING IN THE FUCKING WOODS HE HASN'T HAD TIME TO UPDATE IT, people freaking out over his work, That one time someone sent a TV crew to his house because they thought there was a ghost in it but they were chased out by a very angry man with a scalpel.

Self Control: Depends. He'll stop at nothing to get the thing he needs for his dolls.

Motivation: His dolls and trying to fill the void in his heart with said dolls due to his loneliness.

Intelligence Level: The man has a phd in anatomy just to perfect his dolls.

Confidence Level: Self doubting at times due to his past failures in his work.

Philosophy: "Everyone's a puppet to someone, even I am at times."

Fears: People abandoning him once again

Family: Him and his dad don't see eye to eye since he got a job in something his father doesn't approve of, his mother however, he has no idea where she went but she approved of his work before she went missing.

Friends: Only Dolls. He was considered the weird kid in school, but look at him now. He has a manor and can make the woman/man of his dreams if he so desired.

Best friend: Samu, his most prized doll and one of his first from after his return from college. To him, he couldn't have a more lifelike doll.

Enemies: Him and his classmates from school. He has since parted ways with them and has never spoke of them again because if they didn't think he existed why should he care about them?

Strengths: Creativity,Determination, Keen eye for even the most minor of details.

Weaknesses: Socially Awkward, Talks to himself and his dolls too much, Perfectionist,

Hobbies: Dollmaking, Voicing his non lifelike dolls, Baking (not good at homemade but it calms his nerves)

Habits: Picks at his thumbs when their dry, holds Samu's hand when nervous

Pets: He can't even keep a plant alive, so he isn't risking it.

Area of Residence/Environment: He lives in a seemingly abandoned manor in a forest nearby a developing city. It's not horrible persay, but he needs to figure out how to operate a weedwacker.

Health: Underweight, but good immune system at least. Sometimes he doesn't get enough sleep due to his work.

Born into an upper middle classed family, Aris had a normal life, outside of one thing. His parents somewhat allowed him to play with whatever toys he wanted, but the boy leaned towards the dolls instead of sports that other boys his age leaned towards. His mother was very much pleased that he was happy, but his father tried to push toxic masculinity onto his son, and presumably heir, much to his dismay. Aris naturally didn't care as he was only a child who wanted friends but couldn't find any due to the boys being unwilling to let him join in their games in order to please his dad to show that he wasn't just obsessed with dolls. The girls also rejected him for fear he'd go all gross as boys normally do, so Aris was left with his dolls as his only method of socialization due to his classmates outcasting and verbally abusing him, to the point where at times, they would pretend he didn't exist so they wouldn't have to work with him in class.

When puberty hit the boy however, it hit hard as the boy could no longer hit those high notes for his doll's voices and was extremely devastated so he had to work around this with dolls that already had voices built in, but they couldn't fill that void. They couldn't sound as right as he wanted, nor was their dialogue, which fueled his outrage and decided to channel it into something creative: Creating the most lifelike dolls he could. His mother was super proud that he found something he could turn into a career, but it only fueled his father's disappointment in his son. In a desperate attempt to win his father back, Aris accidentally dropped the hint that he would get a phd in a medical field, which seemingly brought it back, but never really did, but it was a false hope that Aris could cling on to.

During the summer before his junior year, Aris soon got an apprenticeship under a toymaker so he could hand craft his own dolls,alongside teaching him many skills for his craft and later getting the father figure he never had in his life.

Once the dollmaker had returned home from college, phd in anatomy in hand, his mother was nowhere to be found as she'd been missing for several weeks before his return, his father with another woman, and his childhood manor abandoned. He returned to his old home, desperate to hold onto the last memories of his mother and childhood and later started to take commissions from many people. Now, he's slowly working towards perfecting his craft for the doll of his dreams: the sibling he never had.