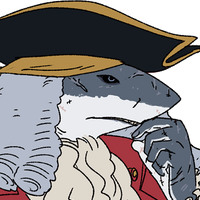 A world where fish got out of the seas, likely to revolt humans' entitlement to their resources, or who knows what else some unknowable entity in the seas may have in store for them. One of the most fearsome pirates, Captain Victoria Carver, a great white shark, has seized control of the biggest merchant routes and has since been enjoying the role of a privateer. She enjoys being powerful and being seen as powerful and is quite quick-tempered when it's called into question.

Her main crew consists of rough and tumble shark women like herself, and she'll show off her swordsmanship whenever possible, but she's not a stranger to biting her foes and eating them gorily. Her crew is proficient at capturing enemy ships, but it remains to be seen if she'll turn against the government she's working for due to her history of backstabbing her allies, so her true agenda is a mystery.

Captain Carver values sophistication and grace, which is somewhat at odds with her highly violent streak, especially when first blood is shed. Her swordplay is mostly just for display, but then, it's easy to carve up humans when you're a thick-skinned shark who can withstand a lot of abuse from human weapons.