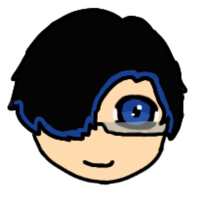 Disting. Feature: his strand in front of his eye

Other: He let nobody see his right eye

Other: he always wear his glasses

"Positive feelings do not exist"

Stephen is a vampire who has a problem with feelings, he feels very rarely and for him some people represents his feelings

Other: Stephen loves to read and does it most of the time

Other: When a person representing one of his feelings dies the feelings go away with them and Stephen just can not feel it anymore

Michael was born with his twin brother of a viol and is considered by his family as the black sheep. His parents finding him useless kept him shut up, but he sometimes went out on his own and watched his brother from afar playing with other children. One day he saw one of his brother's friends, Arashi push Stephen on the road and with his teleporting powers he could have saved him but did not do it. after that his parents force him to become Stephen and take the place of his brother. His big brother Cain who had a lot of affection for the first Stephen, is began to hate Michael. His family finds an arrangement with Arashi's family to make the murder a accident.

Michael so became Stephen (and now refuses to be called Michael) he went out with stephen's girlfriend who realized the subterfuge but did not say anything and just broke up. he had to also frequent Arashi who knew the truth and loving torture him psychologically hoping to make him feel feelings. In the end, Stephen lost his taste for life and decided to let himself be imprisoned in the prison (horrible school) and Arashi followed him (school created because of Cain's mistakes)

They have a complicated relationship, they love eachother as much they hate the other. Cain represents the sadness for Stephen

Arashi is the one who kill the true Stephen the twin brother of Michael (who is now Stephen). Stephen hates Arashi as much as he wants him and that's why they sleeps together regularly even if Stephen is in a relationship with Star

Stephen loves Star with all his heart and would do everything for her but he is just not sexually attracted by her and finds herself fooling her with Arashi and that why he has already tried several times to break up with her but can not do it.

Ideri hate Stephen cause is the one who had help cain to create werewolf. Ideri had already tried to kill stephen several time.

Leftt is the son of Stephen and Arashi due to an experience of Cain, Arashi does not know his existence and Stephen does not manage to like him, Star is the one who looks after him like his son

Right is the son of Stephen and Star of the only time they slept together (Stephen wanted to prove to Star that he really loved him) Stephen is very proud of Right and loves him immensely as his greatest success.

• Stephen in his taste and habit is a real british cliché