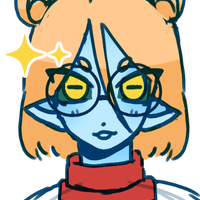 Chryses was born in a subterranean laboratory, close to the sea in an area formerly known for frequent "kraken" sightings. She was raised without much care and without showing much care to others- her purpose was, primarily, to assess Tentakitsunes' innate capabilities for both magic and ability to percieve the Other Dimension. Her sight manifested mostly in taste and a frequent sense of paranoia, which she eventually learned to choke down. Most of her outward emotion, actually, was similarly forced down at a very young age; what remained of her emotional range was single-minded determination, tenacity and an insatiable hunger for knowledge that quickly rocketed her status from "test subject" to the lead researcher of several projects. She's incredibly proud of what she was "born" to do, and she'll do anything to further the reach of science.

At least, she used to. Being the lead researcher means doing your own field research. Eventually, she relocated to an apartment on the outskirts of a primarily-tentakitsune city and realized that- for the first time in her life- she didn't feel like she was in imminent danger. The cause of this wasn't too mysterious to her- over the course of her many promotions, she'd been given access to her own files. The relief, though, was immense to her. Now, alone, away from her familiar surroundings and completely lacking in social skills, she's become curious.

Just what does the world hold for her?