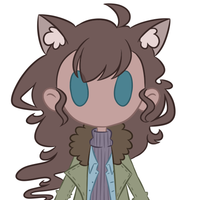 About
"I don't hate being part wolf, but other people don't understand that I'm not dangerous."

Blaire was born with the curse of being half wolf. As soon as the moon comes out every night, she'll completely transform into an artic wolf. However, she always has wolf ears and a tail. She has a younger identical sister, Joslyn, who was not affected by this curse. Blaire is very mature and kind. She is the type of person who loves socializing with other people, and helping the ones in need. However, people are scared of her due to the curse that was placed on her. This has forced her to live in a secluded town and only be able to befriend people who know about the curse. She lives with Joslyn and together they look for a way to lift Blaire's curse.

As a young woman, Blaire and Joslyn's mother was a huntress. She would go into forests and shoot various animals, some for food and some for their fur. It was one of her family's main sources of income. However, she once traveled a bit too deep into the part of the a forest that a witch lived in. The witch loved animals, and became infuriated by the woman who was shooting at them. She cast a spell on the huntress, and it was a curse that would turn the woman's first born into part wolf. This woman was not aware of the curse until she gave birth to twin daughters, the older of the two being born with a pair of wolf ears and a tail. The witch appeared that night, and told the mother that this was a punishment for shooting innocent animals in her forest. She would have to take care and raise a child who turned into one the animals that the mother shot every night.

Blaire is 5'8" / 173 cm tall, the same as her twin sister. She has curly hair that reaches her mid bank and bangs that she straightens out. Her wolf form is just a typical artic wolf: completely white fur and brown eyes. The ears and tail that she always has matches her hair color, despite her wolf form being all white. Her clothing is meant to keep her warm in the cold Canada weather.