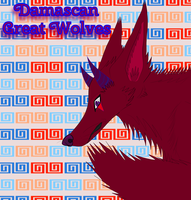 Height (paw to back)

Very large, long bodies, very long tails(about as long as their body), legs are relatively tall(not super tall), their ears are tallish/long(again not super long) and pointed/upright, they have a thin/slender build, general overall structure is that of a canine

Bushy tail, areas like chest/neck/underbelly and tufts on legs are feathered fur(not feathers for fur, but the style of fur), the fur length would either be kinda like a border collie or a fox..not sure yet, fur is soft and silky

****Just whipping this up to help show examples because stuff may be unclear lmao, still a WIP****

Damascans are gigantic canid creatures with demonic and yokai-like features. They stand at roughly 12-18 feet high from paw to back (Special-ranked can reach up to 20ft) All of them are equipped with horns and they always have eye marks //which act as a sense of identification//.

Damascans are able to cross into spirit realms as well as eat souls/spirits in order to gain power.

This is just a general overview of the species temperament, it does not mean that you cannot give a Damascan its own individual personality!!!