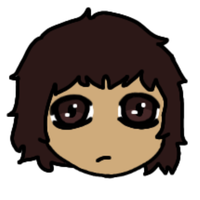 Status: Me, myself and I

HTML by HopelessDreamer22
Image by @picrew

Other: Always wear her panda's hat exept in summer (its one of the reason of her hate of summer XD)

Other: In fact her hair are brown but very very dark so black its okay for her hair color :3

Her family and her friends

when her friends are sad

A little idiot, but kind. Trying to help people because she is scared of being useless. A little naive and sometimes, she looks like a living zombie. People call her panda because of her dark rings. So she made of this animal her totem.

She has two parents, a mom and a dad. She loves them. She has a sister and two brothers. She considered her sis as a second mom and is most close to her sister than her brothers.  She is the youngest of her family. She has some nephews and she loves them more than everything.

Its only in her highschool that she met her real friend (except Brian and Na-chan that she met a little before), they even became the panda family and hope that she will never lose them. She had also some friends in her lecture club and has a best friend Cassie.

One day she had a crush on one of her friends, Fran. But he were idiot and refused give her an answer and "freezed" her. Now, they have a good relation.

Once upon a time, Remi. Remi was a good friend that she met in a bal, but because he is an idiot (just like FRAN) he start to ignore her after her declaration, enven if he told her that he likes her too. He tried to talk to her sometimes after that but she ignore him as much as she can.

Daphné was and still being a good friend Kenshi had a crush on her but realise that only when Daphné start to be in a relationship. Kenshi knows only now that Daphné crushed on her too but thought that it wouldn't be possible because of Kenshi's romantic attraction (Kenshi always said that she likes boys). So, bad timing.

Her more ancient friend, her confident and someone with whom she likes spending time and she don't tell him often but she love him.

A really strong friendliness. Someone that she really like and with whom she likes spending her time. She considered her as a mentor and he had a time when she called her senpai. she love her and she consider Na and Brian as her platonic soulmate

A really strong friendship even if it's recent! They had same center of interests. they are always together and plan everything together.

Dadou is one of Kenshi best friend and her first love! She just want dadou to be happy and like to see her :33

Browny is a smol little angy bean who love violence and torture when kenshi is angry all her anger go to browny and when she is hurt she don't show it but inside browny is more and more angry.

When kenshi have an idea its because of scony who make it happer and when is not concentrate its also scony fault.

Pony is here when Kenshi watch or read something and fangirl over it! she is here when kenshi go to convention and thanks to her Kenshi hug people despite the fact she is not a fan of hug

when kenshi is sad or very depressed its because of Starky, like when she watched engame or when Gintama ended is also the cause of Kenshi panic attack.

Kenshi really love things relate to sherlock universe so in her head she have a little detective! he's also relate to her actress side.

Kenshi love the serie Hannibal and when she was watching it Michael is born. she think that eat human is okay she don't want to hurt people but if the person is already died for her they have no problem to eat it. but she have never eat anyone she just telle people that she going to eat them for fun.

• Kenshi is very sensible and always cry when she watch movie

• You can draw her without her panda's hat

• her panda's hat is a gift from her mother 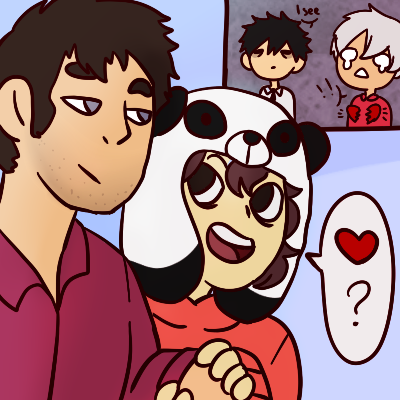