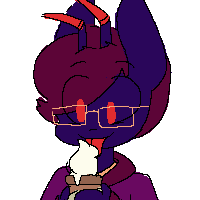 Attracted to power and being protected by such, Chomie's life has been filled with a roller coaster of finding the perfect place to fit in. Characterized by intense dissatisfaction in his youth that made his life a revolving door of aggravating jailtime and unemployed freetime, he has a surprisingly wide set of skills for a mere housekeeper.

Though he keeps up a fantastic facade of being a helpless, meek, and adorable servant, Chomie is actually highly perceptive and manipulative. He knows how to stroke people's emotions to get them to fawn over him, and he regularly uses it to his advantage.

As he was the only aner without a roommate (besides Zagan) when Lucifer arrived, they were assigned to the same dorm (a large suite) together. Though Lucy at first abused Chomie, he remained resolute and quietly worked on training Lucy - not unlike a dog - into being a completely-dedicated powerhouse that would serve Chomie's ends no matter what, and protect him from the rest of the colony and world.

He still works as Head of Housekeeping, helping tend to the colony's upkeep and its functions while being the one man who can reel Lucifer in.

Perceptive and cold, every action Chomie takes is calculated. Though he longs for a relationship in which he can feel safe and protected, he himself is highly distrusting, and employs high standards for anyone he even considered manipulating into the job. He's careful to keep up the facade of being a cutesy and foolish little maid.

He doesn't harbor enough charisma to pass this off as genuine around other highly perceptive people, however, and has trouble convincing others that he's being wholly honest. Though he's careful not to come off as too perfect or too nice, his history and demeanor set off alarm bells for those observant.

As a young Ant, Chomie was slated to go into combat - he had a skill in battle and fighting, but his defenses and stamina left something to be desired. Before he graduating into training, though, a sudden raid by Heaven interrupted his class and he was caught out in the midst of battle.

Suddenly surrounded by the wash of battle, with broken limbs, corpses, and splashes of blood all over the colony, Chomie was traumatized. Only thirteen, he hid under a table for the duration of the raid, watching classmates and dinergates he'd learned to care about die around him. When it was over, he crawled free - one arm nearly torn off - and managed to stumble to the medical bay, where he was healed.

Chomie then purposefully flunked out of combat, though he didn't have any other career prospects. Refusing to speak of what had transpired during the raid, Chomie never received any sort of therapy or comfort, and without a job to put his free time towards, he became highly restless and tense.

This ended up coming to a head when Zagan, Director of Internal Affairs, came by to check up on him. He knew Chomie hadn't gone into any particular career path, and was coming to offer him an apprenticeship under himself, to try to see if Chomie would find a job he liked while shadowing the Director.

However, feeling cornered and trapped, Chomie instead punched Zagan hard enough to knock him unconscious.

Thus began an oscillation between being arrested and taken to jail for harming colonymates or disrupting the colony, and having no job outside of that. With little else to do, Chomie began to teach himself ways to break out of the cells he was kept in - sweet-talking the guards, breaking his wrists to free them from handcuffs, crawling out of vents during the shift changes. It was in one of these cells that he met Beelzebub.

When not arrested, he was a troublemaker: harassing his roommates, defying orders from colony leaders, or reacting violently to even the most passively kind gestures. Vastly incapable of controlling himself or his emotions, Chomie's mind was always on a hair-trigger, always tense.

Word got around about Chomie, the menace, but Zagan stepped in to prevent it circling further. Aware that he'd half-started this spiral, Zagan felt personally responsible for helping Chomie back out of it. At his wits' end, he finally offered to the other: why don't you clean? I heard cleaning helps people clear their minds and feel better.

And though Chomie scoffed at him, when he was laying in his dorm later, his mind churned. Objectively, he knew Zagan was just trying to throw him a bone, anything he could to get the other out of trouble. It wouldn't be long until Satan, leader, started hearing about this, after all.

Still, he sat up, dug out some hand towels from the communal bathroom down the hall, and wiped down the shared window. And, as he did so, a sense of clarity overwashed him that he'd never experienced before.

Chomie threw himself wholeheartedly into cleaning, earning himself a place under the Head of Housekeeping himself. Rather than settle for that, though, he deftly poisoned the other - not enough to kill, just enough to force them to give up their job - and then assumed the position of Head.

And though his life continued, there was brimming fear underneath it all. Still uncomfortable and traumatized, Chomie constantly latched onto people, trying to find someone who would magically help him feel better, protect him at all costs. He latched onto his roommates, expecting perfection and turning violent when it wasn't given. For a while, he had no one else in his dorm.

The answer came in a surprising fashion: Lucifer, who had just left Heaven and was joining Hell. As Chomie had no roommates, it seemed natural to stick them with each other.

To the colony's collective surprise, though, Chomie and Lucifer didn't clash. They still had fights and arguments, of course - it would be absurd to think that Lucy could get along with someone consistently - but in a strange twist of fate, Chomie's general passive acceptance (as long as he felt protected, needed, and wanted) coupled with Lucy's constant thirst for validation of his superiority mixed well, as Chomie was willing to feed it.

Chomie took Lucy's shit, dealt with his insults, and acted rather submissive, feeling secure in his position as Lucy's "favorite bitch". In turn, Chomie became almost a sort of stability for Lucy, being one of the few Ants who actually initially accepted and respected him without question. Of course, it was all a mask - a mask he used to manipulate Lucy into dedicating his life to Chomie, but it was there nonetheless.

Occasionally, Chomie's old habits flared, and during particularly emotionally tense incidents he went as far as to attempt to choke Lucifer. Thankfully (?), Lucifer enjoyed resistance, and found it even more alluring.

And the two did get along ridiculously well (by their previous standards), showing a surprising amount of humanity and attention to the other. In a sentence, they fed each other's ego better than anyone else had so far.

Please read my blog! ohn.chomie.blog
Follow my bluTape for cool tutorials on cleaning --> ohn.blutape.vid/channel/chomie
My DMs are always open, slide in whenever!

Top 10 Ways to Get that Nasty Stain Out of your Clothes! Check out my blog update here: ohn.chomie.blog/archive/ultredan/18312359