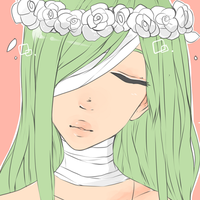 Anything associated with heaven, birds, harsh colors, bright lights, the sound of something being scratched on something else, being so tired all the time, unanswered questions, huge egos, crude language, being alone, corn.

If she stood still for a while, it would be easy to mistake LaPlata for a statue. She's tall and pale with elegant, withering features, perpetually covered with ivy and crowned with a wreath of dying flowers. She has long, desaturated green hair that seems to have never been cut, at least not properly. Her left eye is a dull gray color, and where her right eye once was is covered with bandages.

Her angelic gown - once a thing of heavenly beauty and utter magnificence - has fallen apart and is a tattered rag compared to its former glory. She wears gloves and shoes that much it, though despite going through more stress than the gown they seem to be in better condition.

Having fallen from divine favor, her halo is absent and her wings have all been torn off. One wing remains - a shrunken, pitiful thing that she regrew as an act of defiance.

LaPlata often idly wraps bandages around herself out of boredom, usually around her legs and throat. They occasionally replace her gloves. Very rarely is she ever seen without her necklace, which holds a key given to her by her lost lover, Langer Raton. No one knows what it unlocks, aside from LaPlata. Presumably.

LaPlata is cold and bitter, either harsh toward others or utterly apathetic. She's difficult to get along with and has difficulties trusting others, preferring to lash out at others instead of attempting to hear them out and risk getting close.

There's another side to her that's very muted these days - the side of her that loves change and thrill. Prior to Langer's disappearance, fun and risk were her priorities. She loves to discover new things, even if - or, maybe especially if - the path to learning is dangerous. Her angelic nature also remains and is just as suppressed, her gentle kindness only showing around children and animals.

Her life now is defined by a hatred of Heaven. Anyone seeking her favor ought to be like-minded.

LaPlata was created as the Higher Angel, Lacael, who served Aztael - God, essentially - loyally. Her life was one of unquestioned servitude up until the day Aztael split into two, conflicted on how to deal with humanity's sins. The two formed Hell and their battle caused them to vanish within it, leaving Heaven without anyone to command them. Lacael and two other Higher Angels  - Quenael and Xinphael - decided to take matters into their own hands, assuring the other angels that they would do their best to guide the others in Aztael's absence even though no number of angels could ever match Aztael's glory.

Lacael and the others knew more than that, of course. They knew the heavenly half of Aztael still survived, corrupted by their hellish half. They knew this half locked themself in Hell, mourning over their failure and impurity. But to let the other angels know of their former God's sorry state... it would cause them to panic, to question and doubt their place in the world. The Higher Angels needed to maintain structure and control, to carry out the former Aztael's presumed will. Aztael's continued existence would remain a closely-guarded secret, only for Lacael and her other comrades to know.

Such a huge secret couldn't be kept forever, much to the chagrin of the Higher Angels. A few angels began to poke holes in the lies the Higher Angels told, most notably an angel named Arael. She viciously questioned the ability of the Higher Angels to take Aztael's place and accused them of hiding information and suppressing the other angels just so they could sit comfortably on top of the food chain. After the Higher Angels failed to quiet her with words and threats, Arael decided to lead a full-on revolution to remove the Higher Angels from power. No one angel and no small group of angels would be allowed to claim Aztael's standing, and instead angels would take a passive approach to tending to humanity. Instead of shunning Hell, they would embrace it as a place to hold sinners and perhaps redeem them. She gained an impressive following, but in the end Arael's revolution failed. Arael was executed with a special sword that could slay the immortal, and her followers were condemned to Hell. Things in Heaven quieted down, those who were loyal reveling in their victory and dissenters shrinking into the shadows out of fear. The Higher Angels scrubbed away all evidence of the failed revolution, leaving it known only to those who had been damned by it and those who hesitated to speak of it again.

As time went on, the Higher Angels noticed how quickly humanity was developing. As their technology developed and they began to communicate more, they started to question the world around them. Their philosophy, confidence, in pride in their humanity started to discomfort the Higher Angels; some of them were questioning if getting into Heaven was truly their end goal, some of them were growing curious about the nature of demons, and some sought to dig through the past and discover what the angels were keeping them from knowing. The Higher Angels sought to keep humans from knowing too much and growing too independent, lest their power over Heaven become irrelevant. They restricted the growth of technology, limited education, emphasized the glory of Heaven, enforced a fear of Hell, and blocked entry to Heaven for those who caused trouble.

Things on the mortal plane grew uneasy, with loyalty to Heaven becoming increasingly based on fear. The Higher Angels decided one of them needed to temporarily take up residence among the humans to see how best to proceed, and Lacael drew the short stick. She took up the name "LaPlata Costina" and glamoured away her non-human traits, descending upon a busy city to analyze human culture. It was disorienting, but nothing she couldn't handle.

While studying the way mortals worked and how they truly felt about Heaven, she ran into the trio of Langer Raton, Ouray Nerau, and Khazael. Langer and Ouray were best friends who searched for treasure and took the law into their own hands when Heaven neglected to punish criminals due to lack of interest - something frowned upon by the Higher Angels, naturally. Khazael was a demon who had been sealed into the flesh of Ouray's bloodline, but got along with the others just fine. LaPlata decided to tag along with them, figuring that examining troublemaking groups from the inside would be the best way to find out how to quiet them without attracting controversy.

Together the quartet traveled the planet, uncovering secrets for fun and doing whatever it took to make enough money to get by. Even though their jobs were dangerous and bound to get them sent straight to Hell, Langer and Ouray always seemed to be in good spirits. They did things for the sake of fun, adventure, and helping out those who Heaven passed over. Every aspect of them that confounded her sunk in, and before long she had almost forgotten her original goal. She became particularly fascinated with Langer, developing a romantic attraction toward him.

The four frequently ran in to demons, particularly a Demon Lord named Zhirael who was known for accepting eyes in lieu of souls for contracts. They crossed paths regularly with spectacular results each time, quickly going from enemies to friends who wouldn't admit it. Or, at least, Zhirael wouldn't admit it - the truth was, he was becoming just as interested in humans as LaPlata was. Even LaPlata had a hard time not thinking kindly of him, despite having a hatred of demons drilled into the core of her being. As their adventures unfolded, so too did LaPlata's heart. The beliefs she spent so long forcing upon the mortal plane were rapidly unraveling, and she too began to question Heaven's influence and the rule of the Higher Angels. The group often spoke of a world where the three planes - Heaven, Hell, and the mortal plane - lived with each other without any one plane having control over the other. It was a world that LaPlata wanted to see.

No longer wishing to hide, LaPlata revealed to her friends that she was an angel who had come to the mortal plane to study humans. To her surprise, none of them reacted poorly to this news and instead embraced it, figuring that it made the group just a little quirkier. Langer and LaPlata started officially dating, and LaPlata prepared to spend the rest of his life with him.

Then, one day, tragedy struck. After Ouray and Langer went out on a quick outing together, Ouray returned to LaPlata in a panic, claiming that they saw Langer get taken away by an angel. Khazael confirmed this, and LaPlata was taken aback. She immediately returned to Heaven to search for him, going to the other Higher Angels when she found nothing. She accused them of abducting Langer, presumably using him to get LaPlata to come back. Quenael and Xinphael denied his and expressed disgust at LaPlata's outburst. She had changed so much she could barely be distinguished from a normal human, not to mention that she was cavorting about with demons and had revealed her true form to humans. That combined with her questioning her fellow Higher Angels led the two to believe that LaPlata was no longer worthy of Heaven. Though LaPlata fought back, Quenael and Xinphael successfully stripped LaPlata of most of her power and banned her from returning to Heaven, tossing her back to the mortal plane.

LaPlata, Ouray, Khazael, and Zhirael spent the next several years searching for any sign of Langer, but they found nothing. Out of desperation she gave one of her eyes to Zhirael and asked him to use the power of their contract to find him, but despite Zhirael's best efforts even that couldn't track Langer down. LaPlata fell into a deep depression, blaming herself for the fact that someone so wonderful had been taken from a world with such potential. Now she couldn't even use her position to change things from within and free humanity in honor of Langer. Now she was nothing.

LaPlata clung to Ouray to cope with the loss of Langer, having several children with them. After Ouray eventually died and Khazael moved on to a descendant of theirs, LaPlata left town and became a drifter, aimlessly wandering across the planet in hopes of outrunning her regrets.

Every once in a while she'd speak with Zhirael, but otherwise LaPlata's existence has become little more than an urban legend. There are claims that she haunts an abandoned house here, rumors that she was spotted in a garden there, but all of them are just whispers between neighborhood children. Wherever she is now, if she's anywhere at all, it's clear that she would prefer not to be found. Not until she finds out what happened to Langer and makes up for her failings.

Like all Higher Angels, LaPlata has an unimaginable amount of power and her true form could melt the eyes of mortals from just a glance.

...Or, rather, she did. Her fall from Heaven robbed her of most of her power. Now she can barely fly, much less return to her original, earth-rending form. She has limited healing abilities and a some influence over nature, but few beings above humans would see her as much of a threat. At least, that's how it seems.

Elliot Andeville is Going to Hell