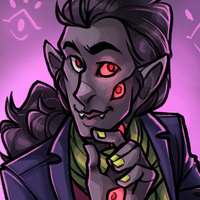 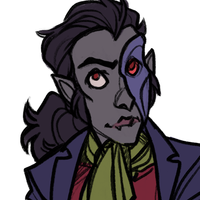 Professor H. August Derleth himself is practically unchanged for Magic University AU; he's still the half-drow linguistics professor who made a terrible decision while studying a forbidden Book, but now he has all these weird coworkers, and the setting is a bit more broad.

The University is still a modern and magically focused college, and many professors are magically inclined, but it branches into the magical applications in more mundane sciences as well, and August is no longer one of the only non-mage professors. 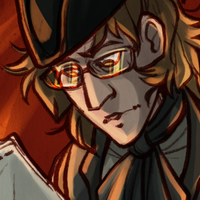 It's no secret that Professor Llewellyn was rescued from Faerie as a young man, and not exactly hard to tell that the unnaturally pretty but unkempt professor is not always entirely... grounded, in the mortal world. He's certainly attuned to the supernatural, but in a Strange way that he doesn't quite manage to hide. August had always privately found the man interesting, nice, but a bit airy and not-all-there, and it's hard not to think he must be a bit dense to have run off willingly to Faerie.
The way Morgan seems to flinch at him now makes him nervous, both unsure of how much the other professor can See, and uncomfortable with the idea that he might have more in common with his faetouched coworker than he'd like to admit.

August never spoke much with the reserved Professor Mallory until his own tech complications and a mostly digital archiving system meant he needed someone else's help to find and request access to any books being kept in the archives.
Oswin is... particular with him, but particularly what is a question that's causing August a fair amount of stress. The amount of eye-related puns the archivist has been throwing at him lately seem too much to be a coincidence, but their usual deadpan expression combined with weird abrupt fluster at points are sending mixed signals. Are they teasing him? Threatening him? Flirting with him? Trying to hint that they know more than they let on??? Do they find him off-putting and are trying to make him go away? Is this how they make friends?
Ordinarily August would just ask, but admitting to being suspicious of all the eye puns seems incriminating. Hrm... 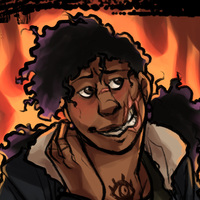 As far as August is concerned, Professor Brandt is more or less the human incarnation of being given a too-enthusiastic friendly slap on the back. Boisterous and confrontational but quick to look out for his friends and coworkers, it's obvious Isa's teasing is affectionate, but he's............ A Lot.
He's pretty open about the unnatural sturdiness he gets from a deity's curse, with a careless attitude toward any danger that his side-excursions might have; though he does seem to attract... attention... from the Things beyond human comprehension that August can occasionally See. August pretends not to notice.

Though their fields don't much overlap, August runs into Ray sometimes in the offices, during research trips, and through other professors, and to be honest finds her a bit frustrating. Her advisor never seems to be around, and she's taken a liking to antagonising the linguistics professor specifically, whether over the audacity of believing that language might be worthy of scientific study, or over his admittedly eccentric tastes in clothing.
August is doing his best to be nice to the grad student, but she is certainly not making it easy.

An upbeat but odd robot of alien tech who teaches at the university. August doesn't interact much with him for obvious reasons.

A softspoken professor who commutes from his space colony home to share his knowledge on "monsters" and other magical beings. August thinks he seems nice, and cute. Unsure how much they've run into each other.

Student at the University. Probably has not taken August's classes.

Student at the University. Probably has not taken August's classes. 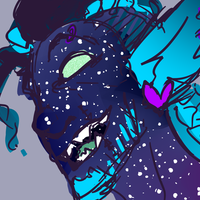 Student at the University. May have taken some of August's classes.