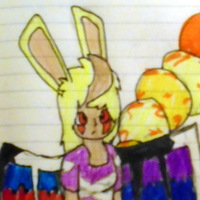 Eeh, she's not evil, just bored, partly because her angel half kinda gets in the way. Yup, first was an ironic Mary Sue that became the basis for a religion, now here's an ironic angel/demon hybrid; like the ironic Mary Sue, this one has actual thought put into it.

As I usually describe abilities here, let's get into those! Cleo has both light and dark powers, although she's better at the dark powers. The only real useful light ability Cleo has is making energy chains, she also can do a dark version. Also, she can use dark energy like a blade or a bow.

Interesting circumstances? You got it. Sarani was her mother, one of the angels had an idea, "what if we brought in someone who could spy on the demons tryin' to take us down?" Sarani had a way to go about that: create a demon, in a way. So, she (somehow) got ahold of some demon DNA and impregnated herself with it, resulting in Cleo. Cleo was trained by Sarani's close friends, namely Aldariel, who helped her control her surging powers. At the age of equivalent to 15, Cleo was sent off to Heck do her job: take down the insurgent demons. Simple, right?

Well, not really. Cleo, yes, was actually accepted by the demons, surprisingly. One in particular really liked her, they became friends rather quickly and lovers in time. Cleo completely forgot about her goal, because this new place excited her. Sarani proceeded to disown her own daughter, for her plan had utterly failed and doing such a drastic act would save Sarani from exile. Sarani herself became a recluse. Cleo became hated, as she was now dangerous. Fortunately Cleo herself could not (easily) be used by Yunuva to do the same thing back, which prevented a full-scale attack.