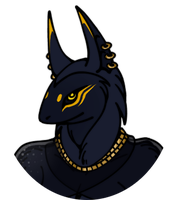 On the surface Anapha seems to be a fairly pleasant young man: he is charming, polite and agreeable if a little bit pompous and lethargic on the side. But just under that layer he is also incredibly secretive and reserved about his own things and barely ever feels comfortable forming relationships that would let others peek deeper into his personality, because the traits they could find are far from flattering and presentable. Anapha is after all a person who cares deeply about his reputation, so the idea of being known as arrogant, manipulating, hedonistic and rebellious heretic doesn't sound at all compelling to him. But because the Tytoninx is so afraid of revealing his unflattering side to public, some of his better characteristics get also swept under the rug all the same: he can very well be observant and witty as well as appreciative of many sorts of beauty and art when he is in company where he can truly be himself.

Despite being a temple servant Anapha is actually quite supportive of Deserter ideology, which is pretty much the opposite of what he is expected to believe in. Reasons behind this are likely a complicated mix of his early childhood experiences (whatever they are; Anapha doesn't have clear memories of the time), him projecting his unconscious dissatisfaction towards his own life into society and his rather disturbing habit of enjoying chaos and drama as long as it doesn't concern himself. Even if the Tytoninx doesn't fully realize it himself, the lastly mentioned trait is the true dark side of his personality. So far it has only manifested in small things such as spreading false rumors and playing ultimately innocent mean little pranks, but it could very well end up making him some day watch someone drown without him lifting a finger to help, just for the heck of it. And after that only the sky would be the limit for a person who just wants to see the world burn.

Anapha is a lean, slender and one could even say graceful Tytoninx. He puts a lot of effort into looking good in all the ways he can think of; from the way he moves to making sure his claws are trimmed just perfectly. He also loves jewelry (to the extent of being sometimes nicknamed Magpie) and welcomes every opportunity to wear some with open arms. He has rather many uncommon physical traits like long ears and dark glyph eyes, but on the other hand his coloration is very minimalistic compared to most other members of his species. There are only a few yellow stripes and dots on his otherwise blueish black fur as well as some dark gradients on his extremities.

The glyph eyes usually grant some magical abilities to their carrier and so is the case with Anapha. His ability is commonly known as Eye for Detail, which when activated grants its carrier an unnaturally good perception regarding small, otherwise unnoticeable things. This includes stuff like spotting dropped objects, observing microexpressions and noticing minor changes in the environment. Anapha mostly uses his skill for his own amusement, but he has also been asked to look for missing items by others every once in a while. What keeps most people from doing so though is the fact that Anapha tends to demand ridiculously high rewards in exchange for his services.

The official traits of Anapha are:

Anapha lives in a large town/small city that is nestled between grasslands and forest. His life mostly revolves around the local temple that among other things takes care of the everyday spiritual needs of the citizens, organizes many yearly festive ceremonies and gives a place to stay for orphaned, sick and elderly Tytoninxes that can't live on their own. The religion practiced at the temple revolves around worshiping the Imperials and especially the destiny that has created them to help the whole planet of Aliarra prosper. The level of technical advancement of the city isn't too high, meaning you can find for example electrical appliances only from the town hall, which is the center of the city's governance. The life in the city is generally very peaceful, even though it does suffer a bit from the "small town syndrome" where some citizens are a bit too fond of gossiping about everything and everyone. Especially the Deserter community living close by is an endless source of rumors for people interested in such speculations.

Anapha's own known history begins from the stairs of the city's temple. He was a 2-3 years old child who when questioned told the temple servants that his "mother slept away". It was clear he didn't understand what it actually meant and that it was just something he had likely heard others saying. Other than telling this and his own name Anapha was rather quiet about his origins; he was apparently brought to the temple by some people close to him, but the temple servants never found out for sure where he came from or why he was left to the temple even if there were other people besides his mother who could've likely taken care of him. Ultimately it didn't matter though, and Anapha was let to stay in the temple's orphanage among a few other kids of more or less similar fates. He turned out to be obedient yet a little bit lazy kid who wouldn't have been anything noticeable if it wasn't for the fact that during his first few weeks he continued to parrot some things he had presumably heard in his past life - things that weren't exactly fit to temple, such as "Imperials should perish" or "your ears need to be ripped off". It was somewhat startling and naturally gave birth to some rumors, but because the young child himself didn't really grasp the true meaning behind his words he was never disciplined for them, only explained that they were not things he should say out loud. Fortunately for everyone involved he learned quickly and adapted to his new life very well, at least seemingly.

Anapha grew up without further incidents and eventually instead of leaving to live on his own he, like many other orphans, decided to study to become a temple servant. He didn't have any actual passion towards the career, but the temple was the only home he knew at that point and it also sounded a whole lot easier than becoming hunter, craftsman or any other laborer whose profession was physically taxing. He chose to specialize in ceremonies and eventually developed even a real interest towards showmanship, especially ritual dancing. Performing gave him a chance to express his flashy, dramatic side without putting him into a spot where he would be questioned about deeper religious questions. Because even if he had learned to stay quiet about it, Anapha never fully adopted the religious enthusiasm of his childhood caretakers. His world view leaned more on the side of Deserters than anyone else and as a teenager he did seriously consider cutting his ears and joining them, but in the end his self-indulgent nature kept him from doing so. After all he already had a rather easy life in front of him if he would just be able to hide his inner thoughts - and that was certainly something he had learned to be very good at.