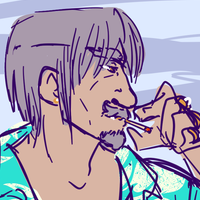 ✘ I'm out of my head

✘ Of my heart, of my mind

Hughes is a man of many hats, but tends to only show off one to the general public: old retired man living on a boat.

But if you have enough money and the right knowelge, he may arrange the following for you: obtaining sensitive information, obtaining expensive items, moving expensive items across boarders and customs, moving people across boarders and customs, shutting down security systems, nice trip around the bay, destroying priceless collections by removing a single piece and then selling it back to the owner for millions, and more. For the last hundred years or so he's ran his own solo black market of services revoling around transportation, security and theivery, and he's very good at it. A challenge is always welcome.

Hughes isn't one to show much emotion or social interest though, and keeps his head as low as possible. He enjoys people reconizing and respecting the skills he's spent years working on, but isn't interested in showing off, especially not to those he doens't already respect himself. His work is only spread of very key word of mouth.

Hughes grew up incredibly bored in a rich family. Uninterested in anything to do with his bloodline, and sick of being told he was going to live a certain life, he packed up as soon as he was 18 and ran away from home. With nothing to his name except a change of clothes and some funds he stole, he quickly fell into working in small crimes. When a master theif noticed Hughes's potential, he attempted to train Hughes, only to find out Hughes was far smarter than he ever imagined. Quickly the kid surpassed his mentor and over took the job, starting down the path of becoming a con artist and treasure hunter.

✘ Cause you can run
✘ But you can't hide

When Hughes's life had gotten on the back end, he ended up taking an apprentice, partially so he could pass on all the work he had set up over the years, and partially because he needed someone with a better body than his if he was going to keep doing his favourite kind of work. The kid was a younger, impulsive genius he saw a lot of himself in. For a while, this set up worked out very well.

But during one of their hunts they came across a cursed artefact that seemed to have a lot more dangers to it than originally shown. Hughes voted they leave it, there will always be better scores. The kid took it though, and Hughes left him behind when they disagreed over an un-needed death that had taken place because of it.

Years later, rumors and curiosities cause Hughes to cross paths with the kid once again, and during an intense situation, Hughes ends up having to decide between trying to save himself over his old appretice. Un aware to the deeper details of the curse that the kid had aquired, Hughes sacrifices himself to try and save the immortal. Of course, during that point, the kid decides he can't continue on with this sort of blood on his hands, and passes on the immortality to Hughes using the cursed object they had fought over all those years ago. This is how Eclipse is awoken.

✘ I'm going to make you mine

Eclipse, or Phantom Theif Eclipse, as he's known by the public, is a side of Hughes that he transforms into with the magic granted to him from the cursed artefact. Eclipse's body is half a reprensentaiton of Hughes's body when he was at his peak, around age 25, and half of the original magical being who had created the artefact, some sort of wolf appearing person. Markings that match that on the cursed dagger glow across his chest and limbs whenever he's transformed, something he tends to keep mostly covered with black clothing.

Eclipse agreed that he wanted to play the part of the Phantom Theif title he took on, with all the drawbacks that came with it. Specifically the fact that any public appearances of Eclispe are always thoroughly planned, and never lead back to Hughes in the slightest. Most of his activites happen at night, and include many illegal features, as he's already got a target on his back, might as well abuse it.

✘ Once I hear your call/h4>

During the traumatic experience of watching someone he had considered almost his child die while also stepping into a completely unfamillair body, Hughes's mind couldn't take on the experience and thus Eclipse stepped in to assist. The two have since struck up a close partnership, while slowly working through realizing they're not as different as they initially thought. Eclipse tends to take a more emotional response to many events in their lives, while Hughes has finally gotten comfortable leaning into his very caluclative and impersonal way of living.

Occasionally issue is brought up over the fact that by situation, Hughes ends up fronting far more often than Eclipse. That being said, neither of them are quite sure what they'd do without the other at this point.