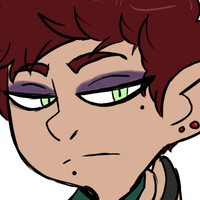 killed lawrence in both lawrence's own route and ren's route as well.

doesnt seem to take kindly to being tied or held down in any manner whatsoever, be it physical or mental.

a quiet sort who doesnt show much emotion on his features unless hes incredibly angry or annoyed. rarely smiles but its possible. prefers neutral expressions.

wears eyeshadow a lot (usually purple) but sometimes goes without it. has two ruby studs in his left ear. beauty mark under his left eye and at the right corner of his mouth.

can and will kill you with any means possible. prefers blades of many kinds though he likes the way knives feel and the garden shears he murdered lawrence with are a sentimental piece to him.

easily embarrassed but tries to hide it by forcing a frown and huffing (hes bad at hiding it, his face gets very red).