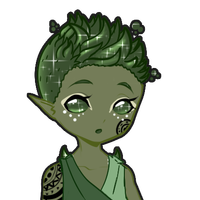 A soft-spoken and gentle Pakkeli who grew up in a group of wanderers. Because of this, she was very close to her cousin Ganja while growing up. The group would often travel to Quiso for different types of festivals over the years. There she met and became close to the Elder witch, Bak'ra.

When her family broke off to officially move to Quiso, Fio became bored and wanting to learn more, asked Bak'ra to take her with her and test her the old ways. Bak'ra rejected the young Pakkeli, not believing that she would cut out for the life she lived.

Not willing to give up, Fio followed Bak'ra in secret after she left and followed her home the whole way. This of course surprised Bak'ra when they returned home, as the weakened Fio knocked on her door just a short time after. Giving up, Bak'ra took the young girl in.

It was nearly a year later that Momiji stumbled into the camp as well, the skin girl having missed her goal of reaching Yokovich and then being run off by the Degexit'an Tribe. Helping to keep the girl from dying over the next few weeks, Fio feel heard for her but not thinking Momiji could possibly feel the same or have remembered much through her fever dreams, she didn't dare speak up.

However some time later, while Bak'ra was away, it was confessed after Momiji misread her text and ate a poison berry. Fio tried her best but Momiji had taken a turn for the worse. Though this was only a stage of the healing process and was totally normal, unknown to the young students.