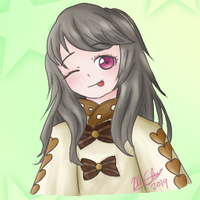 8 - (She can age, but it just takes a longer time compared to when she was human)

Usually she is quite cheerful and optimistic. And because she died when she was a child- she is still not fully mature yet and doesn't quite understand the "adult affairs" her father used to mention. She's also a bit mischievous.

Belonging to a rich family, Annabelle had a comfortable life when she was still a human. Because her life was so comfortable, the other children in the poorer neighborhood were jealous of her but at the same time, scared to approach her because of her father.

But after her father, a debt collector, was ambushed during one of his trips- her house was burned down by her father's murderers.

She manages to escape, but was left to live on the streets for a few days. Because of her frail body, she was not able to survive for long and she died from starvation.

She continues to live as a mischievous ghost who sometimes plays with the other kids in the neighborhood.  And because she died of starvation she greatly appreciates food. They say that when your food has lost its flavor and has become tasteless, its essence has been absorbed by a ghost.

When she was human she always carried around a pink stuffed bear plushie. When she became a ghost she uses the bear as a temporary physical body to be able to play with the neighborhood children.

Annabelle's travels outside her hometown begin when she meets Aurora.

Her two abilities are...

While being out an about in her ghost form at night (she tends to travel more at night because there are less people around to see her traveling with her floating teddy bear- she carries her bear around with her telekinesis), she spots Aurora resting under a streetlight. After telling Annabelle that she was ill, Annabelle and Aurora find a secluded place in a nearby forest to settle for the night. From that point onward, Aurora has been Annabelle's companion and the two are on a journey to try and find a cure to Aurora's mysterious condition. Although being on a quest for Aurora's health, the two of them make occasional trips to Annabelle's hometown so that she can catch up with her friends.