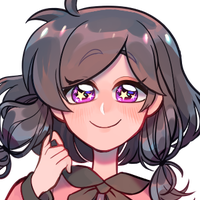 She once lived in a constellation called Sirius all alone, having run away from her parents at a young age due to the types of people she could  truly see they are. They'd not truly wanted her, but a boy, and while they never spoke of such a thing in front of her, she is able to see  people's true natures by looking into their eyes, and saw what their intentions originally were. Having wandered around the constellation for what seemed like an eternity, she finally found an abandoned home that she claimed as hers, and chased away everyone who dared try to take her home from her, with good reason too since there was a stream in the back. She often sat on the edge of the clouds and flicked her fingers into the water, watching as stardust was captured and taken elsewhere. This small home lived on the outskirts of the nearby village, and much to her luck, passerbys would often bring her food. She knew they pitied her, but naturally, they didn't want a child of their own, and she only took what she needed from these people, traveling up and down the edge of the stream every day.

One day a man she'd not recognized was plucking stars from the very night sky itself and whispering something to them before sending them back into the speckled sky. Curious, she approached him, attempting to stay out of his sight, but much to her dismay he looked over and smiled at her sadly. She could see that many things had happened to him, the village ridiculed him, but for what reason? There was anger, frustration, but overwhelming sadness in his heart, something she'd never seen before. When she asked him what he was doing, he chuckled and said, averting his gaze to the glowing star in his hands, "Encouraging the humans." Baffled, she sat down next to him and watched him for the longest time. He would take a very specific glowing star from the sky and cradle it in his arms before sending it back with a soft kiss. From what he'd told her, he could hear the woes of humans that talked to the night sky from Earth and who often wished for many things: happiness, the end of their sorrow, a specific event to happen, the wishes seemed endless. Try as she might have, she could not hear anything from the stars he presented her, but as much as she wanted to become frustrated and storm away, the man was kind and told her what to say to them. With each passing day that she came to see him, eventually she began to hear the voices as well, and she was able to properly whisper them encouragement.

She began to find a companion in this man, and he seemed to take her under his wing as well, as he would encourage her to sit in his lap or carry her upon his shoulders. It was something she never thought she needed, and she laughed as brightly and happily as her little body would allow her to whenever she came to play with the man. Nameless, he suggested she give him a name, and the name "Cyrus" popped into her head. He mused it was a rather interesting name, and accepted it, filling her with even more delight. One day when she awoke, she felt her body was heavier than any torrent of water holding her down, and no matter how much she struggled, she couldn't feel any of her limbs. The longer she lay there, the hotter her body became, and no matter how wide she opened her mouth to cry for Cyrus, no sound ever left her mouth, and tears ran down her cheeks as she longed to have Cyrus take away all the pain she was feeling. She closed her eyes and soon she felt her body becoming light, the heat seeming to detach her senses, but soon she felt arms lifting her up, and prying her eyes open, she could see Cyrus. Although his mouth moved, she couldn't hear anything, and settled for closing her eyes again. She felt his arms leave her and her body became even lighter than before along with the coolness of something around her, but it felt soothing, such to the point where she felt she'd fallen into a deep, deep sleep.

Now, being reincarnated on Earth, she is a happy, bubbly little girl who doesn't remember much about her family due to being an orphan. She loves spending time in the park and playing at the beach. While strolling through the city, she noticed a trio who had just come out of a store, arms filled with bags, and from the smell of it, there was food as well. She couldn't help but stare at the bags as her stomach growled, and the girl with long, blue hair noticed her staring and approached her. "Are you hungry?" she asked with a warm, brilliant smile, and Aya nodded, knowing she could trust her. The eldest brother suggested they take her around to the police station to help find her parents, and as she ate with one hand and held his hand in the other, all she could think about was how delicious her meal was as they walked along. At the station, they were talking about putting her in an orphanage, but at that moment, Fuyuki pulled out his phone and spoke to someone briefly before putting it away. "We have found her uncle," he replied before scooping her up and ushering the other two out of the station. She munched on an apple and giggled, there was no uncle, so she knew he lied, and they discussed allowing her to stay at their home instead. A happy feeling fluttered in her chest. At their home she was welcomed warmly, the pretty girl from earlier letting her sit on her lap in the kitchen, and telling her that she didn't have anything more to worry about before hugging her nice and tight.

Amongst the commotion of preparing dinner, she froze when a vaguely familiar voice filled the air. She peeked out of the kitchen and stood behind Fuyuki to see who the voice originated from, and once the two had locked eyes, tears began to spill forth at the man standing before her-it was none other than Cyrus. She clung to him tightly and refused to let go his entire visit, and ended up going to live with him as well. In this huge mansion, she was surprised when there was another man living with him, and his name was Artemis. From what Aya had seen, they were currently married, and her eyes lit up brightly as she finally had found a set of parents who loved her with every ounce of their body they could.