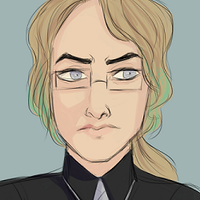 Lawful Good, maybe leans kind of Neutral Good in terms of the setting.

He's worryingly familiar with it, at any rate.

His superiors (though he won't admit it for the sake of the safety of himself and those around him), messes, people who hold anything over the heads of others, vagueness, being rushed or timed, emotional pressure, losing things he was just holding, geese, midterms.

He prefers creamy for sandwiches and dipping, but when it comes to eating it with a spoon out of the jar at 2 am he prefers crunchy. Listen, sometimes these things happen.

Nolan is a reserved and introverted person, preferring to mind his own business and avoid getting too close to others. He's intelligent and focused, willing to spend as much time as necessary to come up with the best solution to a problem. He often needs this time, as while he can answer almost anything given the time he isn't the fastest thinker or learner. He needs time to reach his full potential, but so long as others are patient with him he's willing to wait forever. He takes mistakes in stride and learns from them, taking a significant failure to discourage him. He spends most of his time alone.

Nolan can come off as cold and distant, but when you get to know him he's actually a very gentle, understanding, and nurturing person who loves to learn and assist others. He just doesn't want anyone to get involved with the mess he's found himself in. He already has too many people he needs to protect. No one deserves to have to go through what he's going to, and if he needs to rudely brush others off to protect them then he'll do so without hesitation. He's a person who cares deeply about others even if he's never met them, and he's more than willing to sacrifice himself to ensure the safety and happiness of others.

Nolan was born into a loving and supportive family who helped foster his love of learning and medical science. He dreamed of becoming a doctor from a young age, driven by the idea that he could make a living off of doing something he loved that helped others. He struggled a bit to keep up in school, but through diligent studying and passion he eventually graduated high school with enough success that he was accepted into medical school.

While in high school, Nolan's father, Sullivan, got a new job as a doctor for a hospital in a distant city, requiring him to move. Nolan was close to his father and was disappointed he would only be around for visits, but at the same time he was proud of him and strived to be like him.

Much to his surprise, while in his first year of medical school his father returned with a warning. He told Nolan that he should drop out of medical school and do something different with his life, that Nolan couldn't handle being a doctor and should cut his losses while he had time. Nolan was taken aback by this. Throughout his life his father had been nothing but supportive and proud, but now he was suddenly against Nolan following his dreams. This was a huge blow to Nolan's ego and led to him becoming more withdrawn and self-conscious, but at the same time it drove him. He would prove to his father that he could handle medical school and he could handle being a doctor. He would become an even better doctor!

Sullivan's visits became less and less frequent, and each time his warnings became graver. Eventually he vanished altogether, and Nolan worked harder than ever to succeed. He completed medical school with flying colors, and though his father's betrayal and absence pained him he was proud of himself for accomplishing his dreams.

To his surprise and happiness, Nolan received a job offer almost immediately from the same hospital his father had worked for. It offered housing, insurance, very high pay... it almost seemed too good to be true. His family expressed concern that Nolan would leave them behind just as Sullivan did, but Nolan assured them that he wouldn't become like him. He would stay kind, always believe in others, and stay close to his family and always be there to help them.

That was the last they ever heard from Nolan, receiving word that he died in a car accident.

The truth was that Nolan reached the hospital just fine, but when he arrived there he found it to be mostly abandoned. It was just a shell of a thing meant for a particular purpose. It was operated by angels, and they told him he was about to bring the mortal plane into a new age.

He understands why his father was trying to warn him, now. He understands why he had to be so vague. He wished he would have listened, but he's too far in now to go back. It's been about 20 years since that day, but he hasn't given up hope. He's seen the light at the end the tunnel and has set everything into motion to chug toward it. All he can do now is wait.

Nolan is an ordinary human being with no access to weaponry, and as such he lacks any special powers or abilities.

...But there are some odd things about him. Every once in a while there'll be a blackness at the corner of his eyes or a patch of darkness at his fingertips. He's sturdy and doesn't seem to need to eat or sleep to survive. Perhaps he's not entirely ordinary.