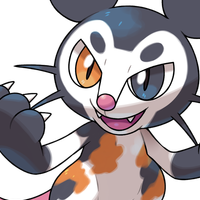 A small, fierce Pokémon that can be found in both the wilderness and urban environments. Frequently discovered in dumpsters, but oftentimes is not worth trying to remove, due to their temper and sharp teeth.

Does not get along with humans very well, despite often living among them. Frequently seen around other urban Pokémon, such as Meowth or Scraggy-- interspecies packs and gangs have been rumored, but not documented properly. They're also prone to charging those that accidentally discover them, even if their opponent has no intent of fighting.

When found out in the wild, they are more inclined to flee or hide in dens among tree roots. Berry trees are often favored, but not a requirement for nesting. Common predators include Noctowl, Scolipede, and Zoroark-- though friendship with Zorua is a common occurrence.

The user sharpens its claws to boost its Attack stat and accuracy.

The user bites the target with toxic fangs. This may also leave the target badly poisoned.

The user boasts its strength and attacks the target. The more the user's stats are raised, the greater the move's power.

The target is attacked with a slash of claws or blades. Critical hits land more easily.