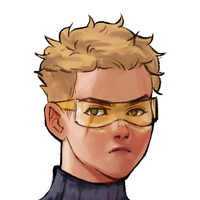 "PUSH THROUGH THE PAIN. GIVING UP HURTS MORE."

Suzuki is a first-year hero course student, working towards his dream of standing shoulder-to-shoulder with the world's greatest heroes. Determined to the point of stubbornness, confident to the point of dogmatic, and dedicated to the point of working himself unconscious, he's nothing if not dogged. Still, those perceptive enough to see past the big smiles, bigger punches, and his ceaseless bravado might see a glimmer of something else beneath it all. Is he truly as determined to make his dream come true as he lets on? Is he as confident as he appears? And why does he push himself far harder than is healthy? To those not close to him, it's a mystery.

Hyousuke’s quirk turns his heart into an incredibly potent power source, generating energy with every heartbeat. He can transfer this energy into objects that use electricity – from toasters to electric cars – or channel it back into his own body. However, while he has a potentially limitless source of stamina, that's not to say he can keep fighting forever. His muscles can still suffer from overuse, and neglecting to rest can and will result in injury. Additionally, he can't use both facets of his quirk at the same time. He's either powering an object or himself - never both at the same time.

Young Hyousuke was inspired to become a hero. How could any young child not be? They were essentially the late 21st century’s answer to rockstars. The fame, the adulation, the money – they had everything a young child thought was important in life. And with two respected heroes as his parents – Rolling Thunder and Amazon – it seemed like Hyousuke was set to follow in their footsteps. He had experienced teachers, was fairly well-off, and had access to training equipment in his very house.

However, fate had different plans. His quirk – dynamo – was incredibly useful, there was no doubt about that. Having effectively infinite stamina and the ability to generate more energy than he consumed made him a scientific anomaly, and something that could revolutionise whatever industry he decided to go into. Apart from heroism. While some optimistic people encouraged him to chase his dreams, the general consensus was that he would be - at best - a rescue hero’s sidekick. A portable generator to be wheeled out when the mains were down.

Close to everyone he knew questioned his decision, and made no effort to be subtle about how bad an idea they thought him becoming a hero was. Naturally, Hyousuke decided to ignore them, and work at becoming a hero anyway. He trained his body as far as he could, and convinced his parents to sign him up for martial arts lessons. With his quirk letting him train harder for longer, Hyousuke was able to excel at honing both his fighting skills and his body. As much as a child could, anyway.

His training managed to close the gap between him and people with stronger quirks for a while. At such a young age, everyone was familiar with their power, but barely anyone had any proper training with it, bar how to keep it from going out of control. Whenever he got into a fight, Hyousuke could compensate for his quirk’s weakness by exploiting his peers' lack of experience with both fighting and their quirks. It was a temporary solution to a permanent problem though. A band-aid for a bullet hole.

Time wore on, and Hyousuke quickly found that gap he'd closed slowly widening once more. People got more used to their quirks, meaning both sparring matches and actual fights got tougher and tougher. It was becoming ever-more apparent that his quirk was unsuited to heroics beyond sidekick duties - but he refused to let that stop him. Rather than discourage him, the glaring difference in power made him even more motivated to train. Somehow, through sheer tenacity, he managed to keep from losing his matches too badly, and he even managed to win a few. But even someone as stubborn as him was uncertain about how long he could keep it up. One wrong move, one particularly bad injury, one day of missed training, and he'd be eaten alive. And nowhere was that more obvious than the entrance exams.

He finally saw what it was like when people let loose. When property damage and injury weren't a concern. He saw how far behind he was, and he hated it. He'd only passed by the skin of his teeth. No matter how he looked at it, he'd only gotten into the course through a mixture of sheer bullheadedness, good fortune, and the grace of God. Doubts took root in his mind, whispering in his ear about how he didn't belong, how he had to just cut his losses.

He tries to ignore the doubts plaguing him, of course, and trains himself to keep from falling behind. Whether it’ll have any effect is a different matter entirely.

▶ Whatever it Takes | Imagine Dragons