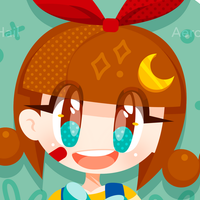 This design started as my Animal Crossing Mayor character but over time she's became my persona type... thing.

Because she's the representation of me we're obviously quite alike personality wise but she represents more of my manic tendencies and the questionable moral choices that I make in video games.

● Often used for other video games. She has the same design mostly but maybe some outfit changes to suit her to the environment.

● Still referred to as Mayor Ava even though she is not just used for animal Crossing images anymore.

Mayor has greenish blue eyes and brown hair with a blunt fringe. Her braids are upturned and are sometimes drawn in a floating style. She's usually seen with a camera round her neck.