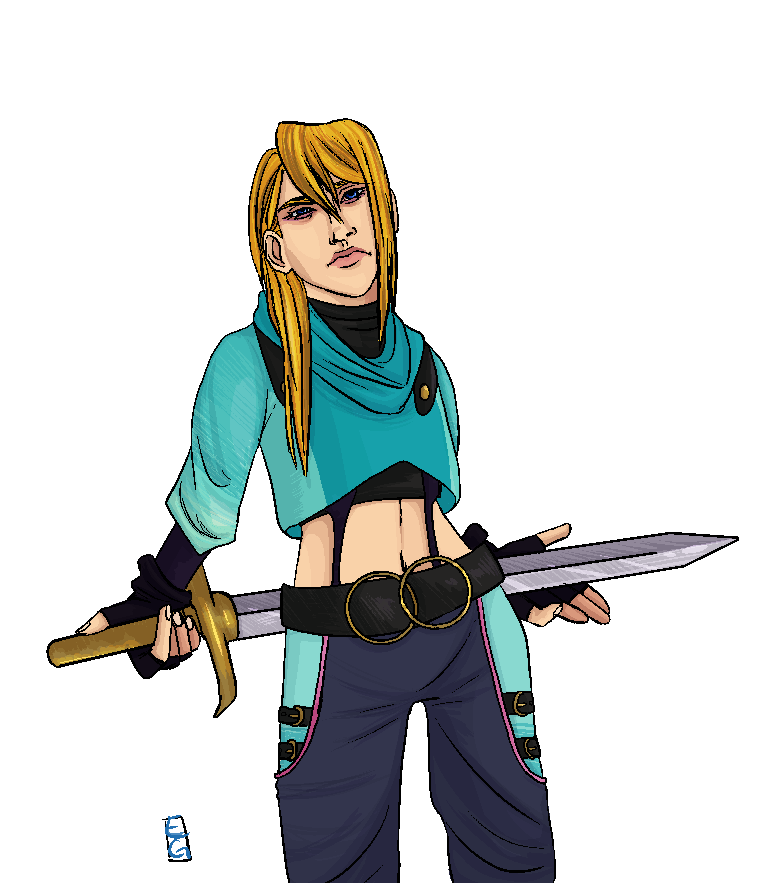 After a family tragedy, Riona grew very cold to the world around her. She wasn't particularly friendly to begin with, as she had very different interests from those around her, but she now doesn't talk much to anyone and spends most of her time practicing her fighting skills. Her determination and drive are her biggest strengths, but she has equally strong flaws. She struggles to get close to and understand other people. It's much easier for her to deflect any attempts with sarcasm and vinegar. If a person can get through to her and become her friend, she shows a very different side: one that is kind, caring, and extremely over-protective. She can't afford to lose those close to her. Not again.

Riona was born to Ayla and Renast Cassel in early spring, five years before her brother Eythil. She was a quiet child, often considered shy as she stuck to her mother's skirts and avoided contact with anyone outside of her family. Even her father struggled to get close to her. When her brother was born, she took to him more than she had anyone else. She was quick to learn how to hold him and was instrumental in raising him, despite how young she was. Her mother was so proud of them both, especially as they grew and grew closer, often finding ways to work at home just to be with them.

Their lives were remarkably mundane for years. The most excitement came from Ayla's job as a military engineer, but even that seemed far removed from the family's suburbanite days. Things were good.

And then the accident happened.

Riona was only twelve, left alone at home with her seven year old brother. Their father was, as usual, at the office, their mother called away for work on a confidential project. It wasn't the first time the two had been left alone, but there had never been an issue before, so no one expected one now.

Eythil was a curious boy, though, and prone to finding trouble. More often than not, Riona had been able to deter him, but she was distracted. She no longer remembers what it was that held her attention, she only remembers turning back to see her younger brother reaching for a pot of boiling water. She remembers the moment it started to tip.

They'd called her little rabbit as a child, quick and jumpy. She proved it that night, leaping at her brother with such speed that she was able to knock him away before the boiling water ruined his face. Little splotches hit his neck, his shoulders, but most of the water fell on Riona's arm, burning it horribly. She was too busy screaming to realize where her brother had fallen, and it took her a few minutes to realize he wasn't moving or responding to her distress.

Eythil had hit his head on the way down, pushed so hard that his skull fractured when it hit the ground. When Riona finally came to her senses, arm burning and tears flowing freely, she scrambled for a phone, calling emergency services and then her parents, as she'd always been told to. It wasn't enough. Eythil died in the hospital shortly after arrival.

Things between Riona and her parents were never the same. Her father was home less than before, which hadn't been much, and her mother became a shell of a person. Any interaction Riona had with the two was hollow, lifeless, and often sprinkled with "it should have been you." Eythil had been the light of their life. It was all too easy to blame his loss on their remaining child, the one who should've kept him safe.

Everything started to fall apart. Riona was left home alone more and more, and soon she found her way into her mother's liquor cabinet. She'd seen enough media to know that alcohol made things feel "better", even if it was unpleasant to drink. She was desperate enough to try it, and...and the cabinet had been left unlocked. It was if the universe was daring her, seeing how far she could fall.

Between the binge drinking, she threw herself into swordplay, her first and only love. There was something about the gleam of a blade, its easy movement as it sliced through the air. Nothing else could replicate the powerful feeling it gave her, and god, did she need to feel power in a life as powerless as hers. She was good at it, too, and only getting better. She had to be good at something, she told herself. She had nothing else to live for.

It's been two years since her brother died. She'll be getting on a train to Bodhum tonight, to see the annual fireworks festival for herself. She's not sure if she'll come home again. But maybe she'll find a reason to live.