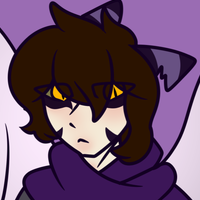 Eroisa was born to a Kau an angel, or so he was told. He didn't know about his mom but from what he was told--his father died while trying to visit the clan.

He was only three. He doesn't remember warning his father. he doesn't remember being hit by a stone, knocking him out. He was found by a patrolling soldier, who took him in and gave him the name Eroisa. That is what he goes by.

Like father, like son, one would say as Eroisa wanted to venture outside of the clan someday. Choosing the role of hunter distracted him, as he had much to learn and practice. However, all things would come to an end. After a century later of being a fully-fledged hunter, he wanted to leave to explore.

And that was exactly what he did. He left the desert and traveled everywhere, always grateful for the role he chose back then. Then, it all spiraled downward the minute he fell in love with a demon. A prince demon, who wanted to know of his species and clan. Whether that demon really did love him or had something to do with his powers that tricked Eroisa into thinking that his affections were reciprocated...that he would never find out.

He loved this demon until he witnessed the chaos that unfolded right in front of him. His clanmates were slaughtered, or taken into slavery. Heavy guilt and betrayal settled into his heart and with the rest of his remaining clanmates, they left to find a new home. There, Eroisa stayed for the rest of his life, vowing to never love and never leave.

Fate found this funny, however, and soon after when his clan found their new home--he found out he was pregnant by his childhood friend. Angered, ashamed and filled with guilt, he stubbornly continued to hide the fact that children grew inside of him. It wasn't his pregnancy was noticeable that he was forced to temporarily give up his role as a hunter. He ended up spending most of his time feeling guilt and forcing himself to eat until he gave birth. The twins he gave birth two were premature and he feared that perhaps they could die. Though he hated their father, he could not bear to hate the children. His children.

Misfortune seemed to follow him, he thinks, for when the kids were toddlers--one died. The other ended up not remembering anything much of his childhood, perhaps traumatized by the events. Eroisa never really knew exactly what happened. He ended up staying near the grave for days. Not one inch did he move.

Only with the news of his now only son, Tera, out of the healing den--did he began to move on.

To this day, he still misses his dead child.

Twelve years after the attack, he and his son Tera crossed paths with that demon. The demon seemed to desire forgiveness, confessing that he still loved the hybrid. He rejected, but also ended up reveling Tera his other father. After dealing with the idiot sick in rain, the two ended up courting, which made them mates again.

Getting knocked up again was unpleasant for Eroisa, but he at least had his mate beside him.
And their newborn son was born.

Eventually he and his mate spilt up for a bit because demon prince got duties or something and promises to be back. He waits. And waits.
Too many years.
His youngest child gets taken by a demon, never to be seen again. He tried to save him but failed.
With the loss of two children and believing that his mate abandoned their family, Eroisa loses his mind. He leaves the clan, knowing that he can no longer serve if his heart is crushed and his mind scrambled. He only embraces his eldest for the longest time before leaving.
Years and years past and he makes his life as a loner. Insanity and hallucinations of his lost children plague him and broken promises whisper in his ears. He hated his beloved. He hated demons. He hated them so much. He wanted to kill them all.
One day. Someone trespassed his territory and in a fury, he hunted him down. But...it turned out to be his own son. He had killed Tera, his own child. And that was the final straw. Over wrought with grief and self blame, he flees to the cliff after giving a proper burial. There he stands at the edge of the cliff before killing himself with his sword.