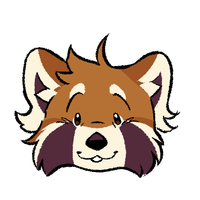 Arthur comes from a heavily wooded village a decent distance from Apricot Bay. As such, he enjoys a more down-to-earth life where the air is fresh and plants are abundant and finds himself out of his element anywhere else. Ignoring the advice of his relatives telling him to move to The City to pursue a career, he instead moved to the less harsh and gloomy Apricot Bay where he got a job as a mailman.

Strengths/Talents
Arthur is pretty good at holding a conversation and often chats with other residents when delivering their mail. He's also got pretty solid stamina thanks to all those mail runs. He enjoys pulling out his surprisingly large vocabulary when he gets the chance to.
Weaknesses
Though he does his best to pay attention to those social cues, sometimes he talks a bit too much for some people's liking when he's excited and winds up annoying them.
Fears/Insecurities
Somehow losing his job. He doesn't think it will happen, but he worries sometimes. Also Penny. Penny is terrifying.
Disorders/Diseases
Arthur is perpetually cold even in summer and bundles up year round.
Tics/Nervous habits
When Arthur is deep in thought or feeling nervous, his ears will twitch and his tail will wrap around his legs.