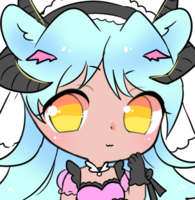 Sleeping on the job, getting paid, idle chitchat with strangers, partying with the gluttony demons, cosplay, plunging all of entirety into eternal slumber, collecting cute charms for her phone

Having to actually wake up for work, being creeped on at work, any other part of work aside from getting paid, rigorous exercise, spicy food

How many bears could they take in a fistfight

Too reliant on magic to have a fair fight, too lazy to show up anyway. So none.

basic info while it's still fresh in my mind

- she's very social, though, which isn't quite as typical because effort

- comes from a long-dead planet condemned by the outer gods where she was part of a noble family that rose up and took over the joint by making a contract with demons & worked with her faction to try and turn the entire planet, and perhaps all of entirety into one big sleepy battery for their demonic power.

- her cousin/bff/boss was taken by said outer gods and sealed in some rock somewhere so she's kinda just doing whatever, it's a pretty good time

- physically weak, relies on magic to summon familiars to both do her work for her and to assist in combat, as infrequent as that might be for her. can also command shadow magic, specializing in magic that damages enemies over time and/or makes them sleepy; can delve into the subconscious worlds within the minds of others but usually doesn't because :effort:

- works at a mansion slash hotel slash makeshift hospital on the campus of hell college that's definitely not co-owned by two of the most powerful demons on campus & licensed by purple satan, gets to dress up as a maid so that's pretty cool. having to entertain and/or care for guests kinda sucks though

- she runs a fairly popular cosplay blog & has a legion of loyal fans that would probably die for her if she asked. luckily for them, she does!