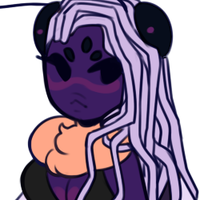 People who think they're better than here, extreme temperatures, precipitation, birds, bird people, getting dirty, music that doesn't have rhythm, getting turned down, blows to her ego.

A self-absorbed moth girl who attends Hell College, mostly skipping classes and wasting her parents' money on parties and valuables. She doesn't care about anyone other than herself and yet demands the respect of others anyway, so she fits in well with pride-class demons. Her illusion magic and love for sabotaging others and denying them everything they want out of nothing but pure pettiness and a love of drama also makes her fit in well with envy-class demons. Needless to say she's not the most pleasant person to be around, so one can only wonder why  mothlady decided to date her...

shout out to memeduchess for blessing me with this gay moth

desima is the kind of person you wish you were cool enough to be around. she exudes an aura of glamour and success even when she's not doing anything. she carries herself with pride, though some would argue too much pride. she's vain and haughty and looks down on those she sees as below her. which is... kind of a lot of people. those who flatter her and those she finds to be cute or otherwise amusing she'll treat affectionately and as an equal, but everyone else gets brushed off and dismissed with a condescending giggle.

that's all i got atm

she probably has cool illusion magic

or maybe her piercings are just glamour...