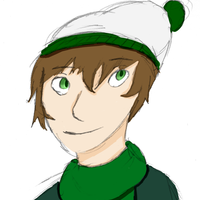 Thomas is a very responsible individual. He actually manages to keep to his New Year's resolutions and if he has a plan, he will stick to it. He likes to plan out everything he does and he has a very set routine that he likes to stick to.

He writes short stories and somehow manages to balance his work with absolutely everything he does. What can I say? He's very responsible. He has everything timed to an absolute T and he gets a little bit very very very disgruntled if his routine is messed up.
He genuinely likes numbers and figures and would help the youngins in their "Calendar" GC from time to time. That's why being an accountant is the perfect job for him.

Thomas is one of the most mature of all the people in his group and honestly, once you think about it, that's not really that hard to achieve.
He's very well spoken and whenever he's finally on the voice channel the Not-From-England ones want him to say anything and everything.

He's the one who created the Calendar GC. He posted in the forums of a website he was on (website pending) and here we are. The requirements to join was that you had to make a calendar with your birthmonths. Thomas has been called January far too often and when he returns back to the real world, sometimes he genuinely forgets that his name is not January, but Thomas. This has some interesting effects.

What's going to happen when your life is so structurally routined but the GC that you created yourself is wreaking havoc on it? He loves this GC, it's the only form of socialisation he gets sometimes.
He's part of the ones who are the most mature but he finds real life socialisation very difficult. He can better express himself over text rather than speaking out loud. It's why he loves this group so much. It's wreaking havoc on his routine and it can get... Really distressing, but he doesn't mind as long as he gets to talk to someone. (Well, that's what he says, that's not what his actions imply) Living a structurally routined life is alright. He's been living the same structrually routined life for seven years straight. Living said life alone is not okay. He never really knew that this was what he wanted in his life.

But that's okay, these things happen.

- Swears he has seen Katrina once in real life. Doesn't remember from where.