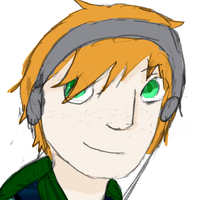 Occupation:  Leaving Certificate Student, he hasn't got time for jobs

Máirtín should be studying for his final exams, but he's spending his time on a discord server with 11 other people, one of which being his little sister. Good going, Máirtín.
He doesn't know what he wants to do with life and he's signed up to multiple arts degrees and PLCs in the hopes he gets somewhere and afterwards he'll know what he wants to do. Good luck with that.
He listens to a wild variety of music, all of which range from Christian hymms to pop to heavy metal to Irish civil war music. He often says, "Tiocfaidh ár lá" over the voice channel and no one knows what that means. He has immense fun speaking and typing random Irish because no one understands and he can put his own meaning to it.
Saffron wants him to study, but that's just not going to happen. Máirtín absolutely could not care less. Well, he did care, it's just that he got very burnt out towards the end of Fifth Year and he decided that he wasn't going to care about the Leaving Certificate and now here he is, doing absolutely nothing. These things happen. You can repeat the leaving but you can't repeat the sesh. Well, that's probably just a now thing.

He thinks that Saffron is extremely annoying but if he catches anyone else saying it HE WILL BEAT YOU.

He plays hurling in his school team and he always uses this as a brilliant excuse to bash people with the hurley.

Máirtín just wants secondary school to be over. He's almost there, but it's not going fast enough. Sad. Máirtín's just kind of sad. His girlfriend broke up with him recently, his best friend STOLE her and his other friends are busy studying for "their future" or whatever the hell that means. Máirtín has pretty much just turned to this group and it's making him happy.

you need to study though, Máirtín.