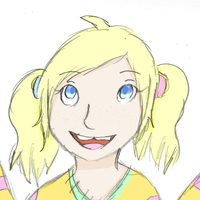 Saffron gets really over excited about cute things and chickens and chocolate. She loves Easter! She still believes in the Easter Bunny and will not let you tell her otherwise.

Also she's going through her obligatory Random Phase. She thoroughly annoys her older brother, Martin, but what can we do? She's in her First Year of secondary school and she's Excited over all these new experiences. She's meeting lots and lots of new friends! She's in that XD owo phase and while this is very annoying, no one has the heart to tell her to stop. Except Martin. He tells her off.
She knows that the internet is Evil so she pretty much stalks Martin around and only goes on the websites he tells her to go on. He's very nice like that. She also goes on the websites her friends tell her to go on but for the sake of convenience we just said Martin. She's the youngest in the group, so Saffron takes the words that the adults in their GC say as gospel which could be good but then again, could be bad. She has an internet best friend! Hint, it's Min-ho. Min-ho is introducing her to to the internet. Oh, new experiences, right? Right...
Yeah, let's tell her that.

She has a ticktock account where she makes lots of those videos. She follows Min-ho and makes collabs with him. True collab 2019.
She's a very excitable and peppy girl. Over-exaggerates her emotions purposely because she thinks it's cute. It's a random phase, she'll grow out of it eventually but for now lets let her be her.
Saffron has a gap between her teeth and she thinks it's adorable. It is.
She likes pastel colours and she has a little stuffed rabbit she likes to carry around with her. Her two different coloured shoes are on purpose because she thinks it's cute. Go on, Saffron!