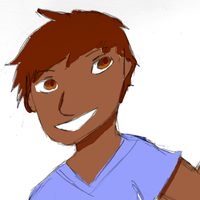 Markus LOVES the beach. He will spend every waking moment there if he can, yes even in June when it is actually winter. He loves it so much that he became a lifeguard. I most definitely totally wasn't thinking of baywatch when I created him, no....
He's very athletic and he likes to work out and, I don't know, flex. Markus likes the sun, sand and sea and practically lives there. Everyday he wakes up and goes to the beach. Think of all you can do there! Well, no, I can't think but Markus somehow finds a way to do everything there. His life isn't as exciting as baywatch but somehow Markus makes life exciting by attending parties and chatting with the girls who attend. He somehow attracts a lot of girls. I think it's the muscles.
Markus is naturally a very talkative person and would talk to you about anything and everything. He spills out some things he doesn't quite mean to sometimes and this does land him in trouble. Do not trust him with your secrets.
He's very well known and popular on his beach and he's invited to go places all the time. He happily goes. He's absolutely loving life. There could be nothing better than what he does!

He is in multiple discord servers and he sometimes posts the wrong things in the wrong servers often with absolutely no context whatsoever. Oh well.
Markus' tendencies to spill secrets sometimes don't go so well with the group. But he really doesn't mean to do that! They just happen and he doesn't realise until it's too late. He needs to work on that. He'll get there.