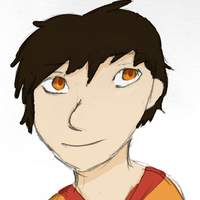 Sexuality: Gay and in denial

He's popular in school. He has his own little group and they're like the Popular Kids that you see in films or something. He has a stylish fashion sense. (I cannot illustrate such style.)
He has called himself Lenkah since he was young because no one was able to say Juhwan when he was little. Lenkah is a cool name though. It's stuck from then on and now everyone calls him Lenkah.
He LOVES Nintendo. He has a blog all about Nintendo games. His favourite game series is Splatoon and he will fight you about this.

Lenkah is one of those guys that seem intimidating in groups but he's actually very nice to talk to. He has a way of talking that makes you feel at ease talking to him. He's very easy to talk to and he'll listen to whatever you have to say even if he doesn't understand it. He has one of those photography accounts on Instagram where he actually does take decent photographs and he likes to join discord servers.

No, he's not out to his parents or his friends yet. He's absolutely in denial. He doesn't know how to deal with this in real life so he's a lot more comfortable with talking about this online. His new friends in the Calendar GC are helping with this.