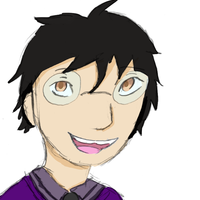 Like his older brother, Minho prefers to be referred to by his nickname. His parents gave him the nickname of Chiko and it's stuck ever since. Chiko is a big nerd. Essentially he is the opposite of Lenkah. Small, not so popular and a lot lazier. He will eat your stash of chocolate and pretend he didn't.

Min-ho is very much your typical thirteen year old. He makes immature jokes and laughs about them. He's discovered the internet and is loving this despite all of Lenkah's efforts to stop him. He has a ticktock account where he makes videos with his internet friend Saffron. They then coincidentally ended up in the same Calendar GC. He's a very sneaky, silly boy and just wants to have a lot of fun in life.

He is completely aware that Lenkah is way overprotective. He does not like this and he sneaks out as much as he can but Lenkah has spies

Chiko watches anime and he especially likes Jojo's Bizarre Adventure. Always makes Jojo references.
He's very small and he's not a fan of this. He hopes one day he'll grow bigger!
You know what, he's young so the things he does are somewhat excusable. If not, we can teach him what to do. Education is always the best for this.
It's just that sometimes he doesn't listen, but you know what? He'll learn with time.