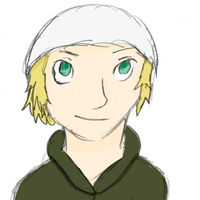 Bashe is a cheese enthusiast. Apparently, this is very important. He will critique your cheese. He will only eat fine cheese. He can instantly tell the quality of cheese.

He's a little more serious than the rest. Absolute deadpan snarker. It's harder to get him to open up to you. He's not much of a talker and much prefers his cheese and computers. He's skilled at programming, and has created many apps and stuff.
Bashe is terribly sarcastic. He drops it into absolutely everything he can. His serious expression often makes it confusing to whether he actually means it or not. Oh well, that's how it is. He's very much a lone wolf and he likes it that way, preferring his own company, but he's tried to open up more by joining the Calendar GC. He's become particularly close with Sive thanks to this group and he's become a little more open to her in particular. It's good! He'll become more open soon.

- Bashe is supposed to be named after a computer virus