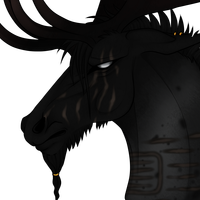 Biography
Name Bahari
Gender Male
Age Adult
Birth Veilara
Titles/Aliases Razorbill, Captain
Orientation Prefers Femininity
I've seen so many ships sail in just to head back out again and go off sinking
exterior
Species
Stallion Appearing
In feral form, takes on that of an antlered stallion. Most specifically similar to that of a Percheron.
Fur Colour
Dark
Dark roaned, his pelt almost mimics that of the dark sea he loves so much. There is little grand in his colouring, nothing bright or eyecatching to most anyone else.
Body Shape
Thicc
Built for pure strength. Has little endurance because of it, and works better at fighting while in one spot. Muscled, despite the thickness. Packs a mean kick with powerful legs, and a rear with that of powerful shoulders.
Eyes
Brown
Brown eyes, before his sight was taken from one that has no clouded over.
Misc
Traits
One eye is clearly illformed. Having it be attempted by physical removal, it is so badly injured that it has no sight in it. Scars run down the length of it, a show of its trauma that it has since outwardly healed from. Scars litter his body, each one holds reasoning that he has inflicted upon himself. Cathartic
innards

A man of brutal honesty, Bahari would much rather give hurtful and hard truths, getting them in return, than attempting to lessen blows with lies of deceipt.

He is unnecessarily loyal until he is no more. Loyalty is earned before it is ever given, as he expects the same from himself to another. Would run guns blazing into a fire to aid someone who has managed to earn his loyalty, asking questions only afterwards.

A driven man. Has been ambitious since he was a boy and has since lived his entire living building for something more than everything he has at the time. Raised himself for a long time, and earned everything he has gotten with back breaking hard work.

Genuinely trusts few, perhaps even closer to none. Bahari has had a life of people coming and going, betraying him, stealing and cheating. He trusts none, but keeps others close enough to better his sights on them. Sooner believe he is being lied to than given honesty. Finds lying to be an offense to his intelligence.

Violent capabilities, knows nothing else from his upbringing and career. Sometimes too violent and too vinditice with a too hair trigger temper. Anger and violence is the one consistency he has had since childhood. Treasures it unhealthily.

A selfish man. Bahari shares little, and gives little of himself to anyone else. Despite his multitude of riches, he will without thought walk past someone on the brink of death from starvation and think little of it. Believes if he was able to work his way up to survival, that anyone can. Does not pity anyone who has hardships and find their way into his life for his own benefit.

Finds feelings of any romantic type repulsive. A tightening at his gut and nausea are consistent and usual first sign symptoms. Anything can trigger it. Either being too dependent on someones companionship, a feeling of jealousy, even just a simple act of enjoying anothers company so much he is driven to seek it out. Intimacy is the same. Forces a belief any sexual encounter is loose and no strings attached. Has not had the same sexual partner for more than a few times in over a decade. Along with repulse, finds himself easily enraged by the feelings, which he usually takes out on himself or, subtly, the individual who evokes them.

Having to primarily raise himself from a young boy, Bahari has known nothing else but hard life on the street. Begged, and did petty theft and work for men who were far too high and stubborn to do it themselves. Lived to survive, and worked the same way.

As an older child, and coming into his teen years, he was taken in by a Captain who put him on deck to work on his ship. Remained loyal to him for over a decade until the Captain passed away and the entire crew dismantled. Lived on the street again for a while, his crimes growing from petty ones to more serious ones. Married a woman and had a son, both who died from sickness within a week of each other while he was gone for a month. Knew nothing of it until his return. Left Main and ventured elsewhere.

After 5 years or so of working for different people, earned enough to get his own ship. Worked hard and constantly with the little crew he had, making a name for himself and rising in infamy until he settled in Veilara as the primary trade ship. When new crews started to rise up, built his name more brutally until he was again on the top and most feared. Now mainly travels the sea with little opposition and competition. Leases out himself, his ship, and his crew to islands needing protection, or the wealthy wanting to take forcible ownership of one.

Conversed with Morana a week ago regarding the situtation he is doing well in pretending is not a reality. Though was incapable of continuing it when she brought it up once more, this time regarding something that probably terrified him more than the initial share of pregnancy. Agreed to take her to his world and get another opinion on whether she was carrying or not. Was nothing but relieved upon her lasting words that she wished for it to be another time. Easily slipped back into delirium surrounding it all.

THEN! Upon his return to his ship one night, startled to find a visitor in his quarters. Y. Already sure of where the conversation would go, and rather impatient and frustrated regarding paranoid thoughts of Y and Minh and malicious intent, was brutally honest upon his thought of Y and what they do for work. Knew for sure, and did not allow what he percieved as another attempt to meddle with his mind, regarding Y denying it. Adamant and stubborn about making sure Y was certain he knew nothing about Bahari, but did not hold back his own thoughts of Y and everything he has seen and been forced to experience. Reacted little to none upon the hard slap Dove gave. Only regarding it later on when the red outline of a hand was evident upon his look in the mirror later in the night. Felt little when Dove left, taking the compass with them, only further sure of the paranoid thought he had been harbouring.

Yesterday spent time with Soren who joined the lone Captain, a stranger (Liange), and a distant aquaintance (Con) - in that order. What was initial conversion between he and the former turned into an awkward place where the Thief felt almost out of place, despite having been in the spot before any others had arrived. When the conversation the three shared clearly didn't have room for him, allowed himself to pull into his mind and thoughts and venture to places he would have rather left for the night, despite how desperate he is to wake up and realize all this confession had been a dream. Later on ventured down to the pond, halfheartedly watched Selene's antics before ultimately sunbaking. Spoke briefly, but did not take her offer up for a feelings chat. Especially not after the promise shared between he and the viking woman earlier.

Yesterday spent a good chunk of the day with Morana and Selene. Witnessed things at the pond that he didn't quite get but he was happy for the sights while resting on the ledge. Spoke briefly about it with the Sea Witch.

THIS MORNING, HOWEVER!!!!! None surprised with Morana starting a conversation, but wasn't sure how he felt upon the confession she was pregnant. Didn't get the chance to part his lips enough with the question of who before she had answered it already. His. https://media4.giphy.com/media/snEeOh54kCFxe/giphy.gif?cid=790b761107077a4c3f680b2044f774f9a084d66bae2f991d&rid=giphy.gif&ct=g. Had, for a decade or more, come under the assumption that he could not father children anymore. But with this revelation, could only wander if he had been so 'lucky', or worse.. there were children out there he did not know about. Hoped for the former, and would allow his mind to settle on that conclusion. Gathered enough thoughts to ask if she was sure it was his and not anothers. With her next answer, however, it was clear it was not anothers, but his.

Upon the confirmation, asked what she planned to do with it. Had his own immediate want for the outcome, but would not voice it out directly in respect of not persuading her thoughts or eventual choice. With her ask of if it would be impossible to raise a child with their vastly different ways of living, told her it was she who would be burdened with its carry and eventual birthing, and so it was not a choice for him to make. Had heard and bore witness to the turmoil and trauma birth can have on a woman, and the risk it takes attempting to give it life when it's due. Felt he had no right to sway her opinion either way, but reminded her he was not a good man, and his life was not for a child. Touched on his confession that he had a son, once, but he died of sickness when Bahari was away. He could not be there for the only child he had ever had with a wife he was genuinely in love with. Knew from that, that he would not be able to be there for another. Finally allowed his gaze to meet the Crimson form beside him the moment she asked a multitude of questions regarding it and their relationship. On what may occur or change. Or how things would be if chose a course of action opposite of his wishes, despite not having been forthcoming with what they were, anyway. Told her truthfully that he couldn't answer that. He may not ever be able to answer that unless the possibility occurs and he is forced to deal with the consequences of his actions. Did ask if anything would change for her if she got rid of it, adding on 'or if you kept it' just to keep things...... relatively neutral. Was unsurprised when she said she was not ready to make a decision, and that time would tell. Surprisingly, however, the Captain is excessively calm around the whole thing, save for a harder beating heart and tension built to excess between the muscles of his brow. Knows, however, the quiet of the night will be the real test to his emotions, and is already well assumed that it he will not be as calm as he's being now.