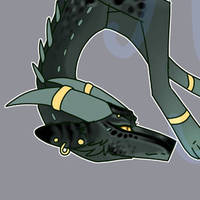 ♤Can see the immediate future (up to a minute) when concentrating. Otherwise when she sleeps she gets weird vague dreams.

♤Drank a little poison every day so she'd be immune. Surprisingly it worked.

♤Was a part of the royal nightwing court and was a valued Advisor. Her position was widely sought after. Obsidia's curse made it much harder to maintain her position. Eventually she left the court and created her own.