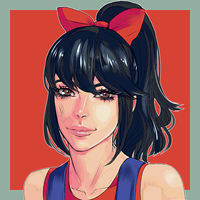 The daugher of Faustus, Matilda always valued kindness and strength. So, when she was called to face against her homicidal stepbrother, she was up to the task. After defeating him, she continued to work to help humanity and keep people safe.

But it didn't quite end there. As much as Matilda tried to do the right thing, lines were blurred as she learned more and more about the situation at hand. As hard as she tried to fight, she never felt as though the outcome was good enough. Instead, she took her frusturation out on Nick, her stepbrother. She hated how elusive he was, blaming him for any issues caused around the time that he ran away. Tracking him down dimension through dimension, Matilda was eventually forced to give up when Faustus destroyed the machine in which Matilda used to teleport. This didn't stop Matilda's obsession with Nick, though, and when April was found dead, Matilda blamed Nick for the death, and was unable to process the severity of the situation.

Faustus was distraught over the hatred Matilda held towards her brother, and decided to try and put it to an end by explaining the trauma Nick had been through and his current situation. Although she refused to believe it at first, as she processed it over time, Matilda came to terms with the fact that April had abused Nick, and that what had occured wasn't really his fault, nor did he have any control over it. Matilda tries to ignore what happened to her brother regaurdless and now tries to brush off the past as if it were a simple unfortunate series of events rather than accepting what occured at face value.

Things grew easier to stomach once Arche 'came back to life', and conversations about the incidents were able to be explained in full rather than information having to be withheld due to legal reasons. Nick and Matilda eventually begin to stomach each other a bit more, but due to both of their respective traumas, continue to bicker and fight constantly over small, insignificant things.

-she is a lesbian