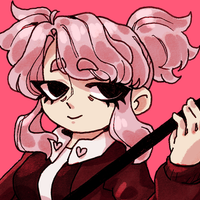 Oh, who is she? A misty memory? A haunting face, is she a lost embrace?

Although covered with layers of clothing, Mortimer has a slender appearance with fair skin, short pink twintails with a choppy fringe, pitch black eyes, long lashes, and a tall stature. Despite having a slender physique, she does possess some muscle and strength. Her scythe is completely black, almost shadow like, with a sharp edge and jagged snath.

Not much is know about Mortimer, she grew up quite reclusive and didn't allow anyone to get close to her nor her family. Whenever her loved ones were questioned about Mortimer, they knew to speak in varied amounts. Morty didn't want friendships or relationships in general, she wanted to be left alone. And that's how she stayed for many years.

Though, one day in the midst of night, she was kidnapped by a crow-like demon. The demon sought after her soul to eat, and the only way to retrieve it, was to kill her. Thus, the demon did. Morty was then forcefully drowned. On the brink of death, she offered a pact with the demon. In exchange for her life, she'd slay not just monsters, but humans as well for souls. The gluttonous demon reluctantly agreed, thus Mortimer's life was spared. From that day forward, she became prisoner to her new owner. Living everyday as if she were already dead, assassinating others for their souls.

Mortimer was found by the Rescue Team, and they offered help to free her from her owner and sins. At first she fought it, she knew what'll come to be if she was found trying to escape. Eventually, she realized how desperately she wanted to escape. She decided to riot, with the help of the Rescue Team. Once she was freed, it was up to her to become her own person. To live once again, trying to recrudesce. Mortimer vowed to become stronger, and protect the ones she holds dear to her. Her past will not define her.

Mortimer isn't who she says she is, because everything is truly a lie. For the most part at least. Her real name is ░░░░░░. ░░░░░░ faked her own death a long time ago to protect her family. She knew what the future held for her, and decided to change it. She made the tough decision to live on as an entirely new person. Leaving her family and friends behind. Although she lied about her past, her kidnapping and ownership remains the truth. ░░░░░░ has yet to reveal this information to anyone, and she longs to see her family again. Knowing she can't, it's an emotional burden she carries on her own.

Cecil is Mortimer's reason to keep fighting. He encourages her and loves her with all his heart. They are quite literally a power couple.

If it wasn't for Dent and the Rescue Team, she wouldn't know where she'd be right now. Dent has allowed Mortimer to grow as a person, and start fresh.

Mortimer sees Kuro as her own kid, giving them constant love and support throughout their relationship. She wishes to help Kuro, teach them right from wrongs.