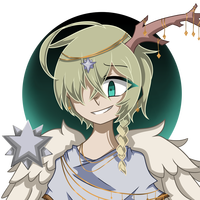 going to give him a little clothing redesign soon.

Astraeus is rather calm and quiet, usually speaking only when necessary. He will become a little more talkative with friends. He's a tad wary of strangers, due to past relations with Dark Starkeepers that use Lights such as him to produce stardust they use for their dark magic. The boy has a kind heart, and likes to try and make people happy with the stars he creates. He can get frustrated and worked up rather easily, especially when it comes to making stars, though since he Catsor, and Pollux were separated, he rarely has issues making stars anymore.

Two Starkeepers, trying to buy time to find someone who could help one of them, fatally wounded, used their stardust to cast a magic spell. They were joined together in the same body, mind, and soul. A new Starkeeper came into existence, the young boy who would come to be known as Astraeus.

Astraeus awoke alone, not knowing who he was, nor where he came from. He wondered where he was, what he was doing, where was his home. And he sat by himself, not moving or making a sound, lost in thought, until he was brought back to reality by a lone, black-winged angel, who smiled kindly at him, hiding malicious intent. Astraeus asked the angel the questions that were swirling in his mind, as he felt some sort of connection, as though he had known him, and he responded, every word dripping with lies. He told the boy that he had been searching for him, who was lost, and that he was his guardian. He quickly spun a fabricated tale for Astraeus to win his trust, and the naïve boy beleived him.

Following the Rogue with blind trust, Astraeus soon found himself at the mercy of a powerful Dark Starkeeper, who the Rogue had traded him to, in exchange for something, so he could be used as a stardust supplier. Unsure how to use his abilities as a Light Starkeeper, his first days were some of the worst. He was not believed when he said he did not know anything about making or retiring stars, and was tortured in response to him being seemingly uncooperative. Astraeus was starved of the energy provided by stardust, and likely would not have survived if it weren't for fellow captive Lights, such as Deneb and her twin sister Vega, who would sneak him whatever amounts of stardust they could, and taught him how to use his abilities as a Starkeeper. Soon he went from "worthless little runt" to the Dark Starkeeper's prized possession and pet- a Light Starkeeper who, on very little stardust, could produce a near endless supply of stardust on his own.

Eventually, after a century of abuse and torture, Astraeus escaped the Dark Realm and made his way to Aegis, the capitol of the Light realm. Andromeda and Perseus, the librarians of the Grand Spell Library, befriended and assisted him until he became stable enough to have his own apartment. 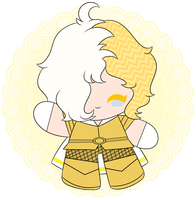 The pair met when Astraeus helped them and two of their friends, Mimas and Fenrir, escape their executions, at the request of Janus. When everyone was safely on Earth, he felt a sense of comfort around them, allowing himself to tell them about his past. He grew to be close friends with them, and not too long after his breakup with Perseus, began to hold feelings for them. The two confessed to each other when Astra brought Telesto to Aegis for a visit and stopped at the Wishing Fountain.

A Mediborg and her guardian, who he met soon after he began having trouble creating stars. Astraeus loves to make stars and constellations for Mallory, and to see her smile. He tries his best to make whatever the two girls would like to see in the stars, and usually enjoys himself until a star or two are shattered.

The two Starkeepers that together formed Astraeus. Now that they're separate people, they all care for each other very much, with Astra considering them his parents and Castor and Pollux seeing him as their son. He often goes to Pollux for advice.

One of only two Rogues he interacts with, and cares for. When they were both captive, and she, with her twin sister Vega, along with Tsuneo and his partner Yousuke, was a Light, they gave him stardust to survive on until he learned how to make stars. Now, he somethimes supplies her with extra stardust, though as of late he's been seeing her pop up less. When they do meet they'll talk happily about their significant others.

One of only two Rogues he interacts with, and cares for. He also assisted Deneb and Vega, along with his partner Yousuke, to keep Astraeus alive and taught him to use his starkeeping abilities. They met again more recently when Astra was recaptured, and they sometimes meet up to chat for a bit.

The Rogue Starkeeper who lied to him in order to make him easily cooperate. Astraeus hates him and wishes he had seen his intentions sooner and escaped. He's learned from Pollux that the reason he felt some connection to him was because he used to be Pollux's partner before Castor. He was recently recaptured by him, only further increasing his hatred for him.

The Dark Starkeeper the Rogue had traded him to. He absolutely despises this man for maltreating him and abusing his abilities for so long. Astraeus is also extremely afraid of him, and the years he had spent chained to him are part of why he used to get so worked up and frustrated when he shatters stars accidentally. When he was last under Raj's control, he participated in a plan that got him assassinated in order to escape. He's quite glad that the Dark is no longer around.

The Daughter of Rajnish, who enjoyed 'playing' with the poor boy even more than her father did. Astra is just as terrified of her as he was of Raj, if not more so.