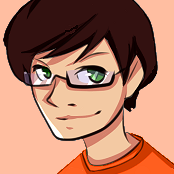 BACKSTORY
Once upon a time I started writing little short stories in 3rd grade. The main character was me of course because who else could get the job done? Nathan was always the leader of a group of ass-kicking teenagers and had multiple "teams" over the course of my writing that he would always hang out with. One had like a dog, a frog, and and a log... no wait, a chicken. Then the other had a bunch of people who were boring and left no lasting impression. Now we have this crazy circus! Nathan remains the main character in The Story, but eventually I matured and my views on things changed and he became just another character. We are very similar yes, but at this point we aren't alike enough for him to be considered me.
PERSONALITY
Bold, adventurous, sarcastic. Loves setting out on grand quests to discover new lands. Not tolerant of stupidity at all. Very open-minded and is seemingly not afraid of anything. He's always out to have a good time, though often people get in his way and he has to take them down.
IN THE NOVEL
He's the main character (and narrator during Season 3 when it shifts from third person to first person omniscient) of The Story. He's essentially the peacekeeper of the novel; stopping Zack Hakton from stabbing people, Amber from setting the house on fire, FlamDawg from farting on Bob, all while doing his own thing. The days usually start with him sitting at the kitchen table or off relaxing somewhere minding his own business when the trouble starts. Then he has to deal with it since obviously no one else will, being that the others are the source of the trouble. His key phrase is "no, no, no", which is often used when dealing with a woman. Let's go wrap Prow in chains! Let's rob the lipgloss store! No, no, no.
It's worth noting that after Alex is introduced Nathan tends to get into a lot more trouble. He goes from being calm and collected to energetic and impulsive. He starts coming up with the crazy ideas and often drags Alex along for the ride.
He's always trying to set off on grand adventures. He's very adventurous! The characters are so lazy though, it's hard to get them to do anything worthwhile. At this point he's happy when they have a chapter outside the house (very rare, by the way). In the beginning of The Chaos (which is a time period beginning halfway through Season 2 and ending with the novel),  he merely tries to finish whatever's started, simply dealing with any problems he may face along the way. Eventually he gets tired of the chaos and tries to put a stop to it. At the end of the day he's just happy when nobody's trying to blow stuff up. But sadly no one ever listens to him... or the almighty Author, for that matter.
RELATIONSHIPS
He has standard relationships with most of the characters. He can't stand Zack Hakton seeing as he always causes trouble. Despite this, he never really seems to care when Zack sets out to destroy him. He also seems to despise Bob for some unknown reason.  He and Alex are best friends for life and share a brotherly bond unlike any other.

EXTRA
He and Alex are as close as close can be. He's not afraid of his wolf side even a little and enjoys spending full moons with him. The werewolf relationship is super adorable- it's like the gorilla loving a kitten at the zoo thing. This relationship may seem weird, but it's kinda a situational thing. When Alex is human, they're the best of bros. When he's a wolf, it's all affection and cuddling. And it totally works for them.

Nathan serves as Alex's voice of reason and also his calendar. Whenever Alex is about to make a decision that will ultimately end badly, Nathan will do his best to talk him out of it. Alex also relies on him to keep track of the full moon since he's very forgetful. Nathan tries to get him to keep track though, seeing as he might not always be around to help him with that, but it never ends well.

APPEARANCE
He wears an orange jacket over a plain yellow t-shirt with some jeans and matching orange shoes and, of course, his rectangular glasses. The jacket's sleeves are often rolled up. While not usually seen, the yellow shirt can have some kind of design on it. Other artists have put things like the Japanese kanji for "wolf", some random scribbles for writing, or the word "PIE".
As always, the first image below is the most accurate with regards to hairstyle and the like.
View More