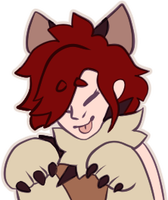 Born the daughter of a rich nobleman, Rosalind was meant to be set for life. Unfortunately her mother died young and her father became distant, but young Rose had her older half-brother to keep her comapny.

When she turned 16, her father employed a young knight-in-training. Rose fell in love almost instantly, and the pair got married as soon as they were both 18.

She became a soldier alongside her husband, but got captured by goblins and held captive for three years. She has only recently reunited with her family but is happy and happily pregnant.