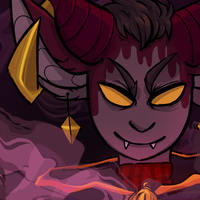 "My condolences, seems this will be the last time I speak to you. May I have your throw pillows when you're gone?"

A parasitic fae planted in the nest of a family of dragons known for their prophets. The combination of natural prophetic abilities and fae magic proved to be a strong mix.

TLDR; Hass is blunt, desensitized and unemphatic, but has great mental and physical strength. He's an extremely powerful oracle.  He foresaw some eldritch shit and as a result he sees the world in a temporal mist; things shifting between past and future states in intense 'visions'. He's legally blind and cannot see details, faces, most color, and text; but can make out shapes and identify his surroundings. He's extremely well-trained in interpreting his prophecies and can tell the difference between present and premonition...but they still cause many difficulties.

Hasselah got into wrestling as a way to stave off intense visions. He's a heel. He breaks the rules often.

After a series of events he ended up becoming Koha's royal oracle. He is a key player in the wars she waged, and the two are close companions. Hass serves as a wrestling coach to her army, and trusted confidant.

An incredibly powerful oracle, Hasselah is capable of seeing and hearing past, future and the outer realms outside the mortal plane. At a young age he foresaw some Eldritch shit he shouldn't have, and as a result his vision was permanently altered. Everything he sees appears as unnatural smoke in the vague shape of his surroundings; he can usually differentiate between person and thing but cannot read or recognize faces. What makes this more difficult is how his visions manifest in the smoke. Any person, structure or thing can suddenly change shape in a way that communicates some past or future event. Hasselah often blindfolds himself just so he doesn't have to deal with this, but he's not free from auditory prophecies, or even smelling past and future (Hey if you can give me a better word for an "auditory vision" please tell me lol)

He has visions frequently, multiple every hour, although not all are terribly dramatic; the time range for prophecies varies between an hour to a year; the longer he sits still the further he can see, to the point where it may even reach decades and millennia. Hasselah has become desensitized to them over time. He never prophesizes in riddles like many other oracles. Instead he's incredibly blunt. He's much more like "that chair turned into a man and I heard him screaming really loud. I think it means someone important is going to be murdered but also that kinda sucked to have to listen to. Hope the actual murder isnt as loud. Fuck." or "I hear water running and I think that means a good harvest or some shit but it's making me really have to piss". Some visions still disturb him, but Hasselah has become particularly skilled at hiding it.

Hasselah's earliest moments were not gentle. As an infant Inkcap in a dragon's nest, he failed his first two attempts at entering host bodies, killing two of his brothers before succeeding in a female body. Although the scene was ghastly, his parents accepted him as one of their own. As prophets, they had long made peace with death and fate; they merely lost two sons and gained another. How could they blame an infant trying to survive? They kept his true identity as an Inkcap a secret from all others.

Infants don't do much. The visions came to Hasselah very early and he could do nothing about it. He saw things he shouldn't have seen, and his perception of the world was permanently altered that he would see things in states between past, present and future - a transient fog.

He grew up with his surviving sister, and was quickly surrounded by the rest of his clan for his incredible talents. For better or for worse. He was taught methods for coping with his abilities that would drive most to madness. They taught him how to interpret every strange and prophetic vision that could ever haunt his dreams or appear in his tea. However, as the most powerful prophet the bloodline had produced in years, many members of the clan felt they had to give their own input on what Hasselah did, how he dressed, where he went and even his choice to transition.  While magic shapeshifting made physical transition fairly easy, there were many pressures to take a place in their ancestral line of powerful female oracles . Hasselah's parents constantly had to fight them off while Hasselah struggled to even just sleep without forseeing some sort of apocalypse.

Hasselah's relationship with his sister was strained. She stood by as every member of their extended family obsessed over him. She also had the gift....just not enough.
His parents were loving; his Mother and Father letting him develop and pursue his interests despite the cries of protest from their clan.
His first accurate death prediction was that of his father's.

Physical exertion made the visions less frequent. As a result Hasselah became very active; he enjoys wrestling. He even developed a career out of it for a while. Hasselah became Harbinger, a heel who could see your every move and had no qualms against cheating. He knew what got the crowds wild; wearing his blindfold (something incredibly mundane to him) as a gimmick for the amazed crowd. He would pretend to peek under the blindfold, bite and throw insults to further rile them up. However; the limelight and the rumors that spread about athletes alerted those who hunt down Inkcaps. He was captured and, unable to exercise, became victim to more and more intense prophecies that continue to affect him at night. He saw things beyond his lifespan and universe that he could not comprehend.

News of his arrest was how Queen Koha found out about his existence as the first other Inkcap she had met. She had him freed, but he was still in awful shape. Once he reunited with his estranged sister, she took him under her wing as a Royal Oracle.  She granted him immunity, and in exchange Hasselah acts as one of her greatest weapons. Over time they bonded; she reads to him and he teaches her how to fight in their free time. They share the same dark sense of humor, learned together about their fairly unrecorded species, and Koha learned how to calm him down and make sure he doesn't hurt himself during intense visions thanks to her fae magic. He's the only one who knows where the Queen went into hiding; told out of trust, but really, there would be no way to hide it from him anyway.

He just wants a good night's sleep for once, and some steak dinner. It's a bit hard to eat meat when you can see and hear what happened to the animal, but Hasselah would sooner swallow his own foot than become vegan.

Hasselah has a love of theater. Since he can often (annoyingly) forsee the end of plays, and can barely see the actors themselves, the way that actors enunciate and the energy used to deliver lines is what appeals to him. He's a bit of a flirt, but his bluntness can be off-putting to some. He wishes people would play chess with him, but rarely does anyone try to play against an oracle as powerful as him (Even though his visions don't...work like that. He's not a mind reader, he's just as likely to hear the chess set get put back into a box as he is to see the next move). Blindfold/mental chess is another story all-together and the day he learns of Chess-Boxing is the day he would finally die happy.