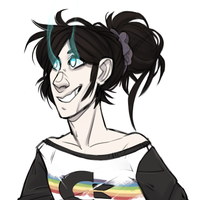 Appearance: Luca is a tall rather skinny guy in his early 20’s who looks like he would benefit from 3 meals a day and a few trips to the beach.

He is pale with long black messy hair that he occasionally pulls out of his eyes and up with a scrunchie.

His eyes are light blue, almost icy and leave trails of pale smoke that dissipates above his head.

They have a faint glow to them in the dark, he is also slightly see through, though it's worse when he is lost in thought or distracted.

Luca is a ghost. He died from blunt force trauma and luckily doesn't remember much about it at all, other than running to get the door, and then blacking out.

Spendt twenty years or so in Limbo not wanting to go towards the light, being nervous about his finals, trying to contact the living on the other side and getting the hang of being a ghost.

He does not mind being dead, but doesn't like thinking about what his family went through, avoids talking about it.

He prefers levitation over walking, and usually floats around instead of sitting in chairs. He usually keeps up his more human appearance but if exposed to direct sunlight this will crumble and his true form will be exposed.

This form looks more like a humanoid shape of smoke and the kind of darkness that doesn't feel right looking directly at, He has his bone ‘death mask’ over his face and his eyes go pupil less and all blue, smoke from them intensities.

This form is still sensitive to sunlight, but even if he gets exposed to it and all the smoke dissolves he will be OK. If he can't get to shade to recompose himself, he gets trapped inside the mask, which turns into a solid object, it's sturdy but even if it gets broken the pieces will find each other again and sort of awkwardly hover around together until they fuse.

He stays trapped in the mask until it's dark enough for him to come back out.

If someone puts the mask on after exposing Luca to sunlight, they gain temporary ghost powers as long as the mask is worn, tho using these powers siphon off their energy until they eventually tire and lose control.

luca can then either resume control and force the mask off, or let it stay to use the person's body if he needs to.

if he for some reason cant get up and resume control, the mask will act on the person's instincts and avoid harm, but also seek out their deep desires and try to act on them.

cruel or vengeful people might make the mask very spiteful and dangerous, so luca prefers being in control.

When it's dark the mask will hover up, smoke will billow out from it's back to reform Luca’s body, then he can choose to put on his more human form or not. letting the mask vanish at will.

Despite being dead he is optimistic, cheerful and easygoing, often leaving things up to ‘fate’ or chance. Thinking he was at the wrong place at the wrong time, which is not far from the truth.

He shrugs off bad experiences and focuses on whatever small things that are good. Seeing his death as a second chance.

Not so closeted nerd, will pull out numerous pop culture references when he finds someone likeminded.

Tries to keep his mouth about it around non nerds. Geeks and nerds get beat up.

Likes having company, even if it's quiet and non verbal, can sit with someone and just read, chill and listen to music. Ambivert.

Plays guitar, did lessons from when he was young, endless planning to make a band with his friends, never happened.