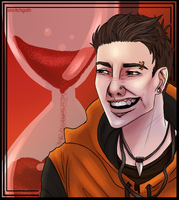 - 1 year after val/gabe's death, auro and chalice plan a ball. chalice asks skimbleshanks to marry him, the ball also kicks off auro and matti's relationship.
- 6 months later, lupin asks eris to marry him
- crash watches lupin/eris' proposal and within months asks juni to marry him using lupin's words
- 10 years after the collector arc, flip comes to skaia and meets ari in a crowd around kaath, telling her he's searching for his brother "tobias". ari checks facts, thinking he's looking for hawkes, and all the facts add up, so she calls hawkes/keysona to a cafe to meet
- flip eventually meets neko/tyle, flirting with them and eventually forming a throuple