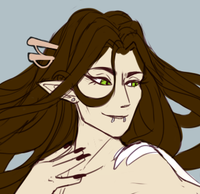 • Hair ornaments • Salmon • Arts and crafts • Staring at the moon

Cecil was born to Valentin and Lucille of Shoal Nebulae, the most prominent shoal of the famed Koi Lagoon.

As the only child of Shoal Leader Valentin, a kumonryu koi known for his beauty as well as his wisdom, Cecil was courted by many a mer. Surprisingly (or perhaps not-so-surprisingly to those familiar with his personality), he rejected every single proposal he received. At one point, there were wild speculations on which shoal he would join, but those rumors all stopped after an outsider ventured into the Lagoon's waters.

The purebred koi mer of the Lagoon form an isolated community: the members stay within the same area their whole lives and only take other purebred koi mer into their shoals. Outsiders, especially warm-blooded mer, are unwelcome, and those who are caught lingering around are quickly chased off. That was why everyone was so shocked when Cecil declared that the struggling orca mer who had unwittingly beached himself in the Lagoon was his friend.

Valentin freed the orca mer before loudly proclaiming that "Cecil ought not to be associating with warm-blooded predators like him." Several mer were even placed on protection duty around Cecil, 'for his own safety.'

Enraged by this turn of events and the willful dismissiveness of his father, Cecil ran away from the Lagoon that night to start a new life with his new mate Sydney. Adapting to Sydney's natural tendency to migrate annually was difficult, but Cecil finds it much more rewarding than living a life chained to a single lagoon. Over time, their little shoal has gotten bigger with the addition of more shoalmates and a shoaling.

Though Shoal Circadia's migration routes pass close by to the Koi Lagoon, Cecil has never once stopped by. In fact, Cecil is happiest here in the summer grounds, despite the colder waters.

An orca mix with more confidence than sense sometimes. Cecil thinks his mate is a bit of a fool (and doesn't hesitate to remind him of it), but he wouldn't trade Sydney for anything.

Cecil's first and only child. He wants to make sure that Lucrece has a less restricted upbringing than his own, but his insistence on keeping them safe is creating its own type of stifling atmosphere.

Cecil has many words to describe his father, and none of them positive. Needless to say, he holds much resentment towards Valentin for attempting to separate him and Sydney. They have not seen or spoken to each other for many years, and Cecil intends on keeping it that way.