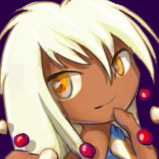 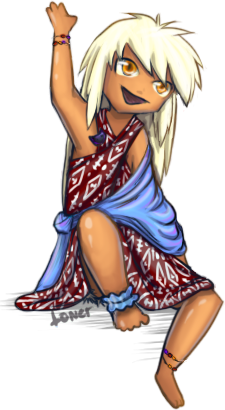 Sem's physiology is naturally impossible. He is too dense to realistically maintain human form, and too much of a concept to possess weight, but he usually is both. This is due to a trend of being subject to forced alterations in his mode of being. Initially he was just a normal black hole. Then came a tribal summoning and binding ritual and he ended up an ever-hungry monster intended to destroy scocieties. He gradually gained sentience and free will, discovering how to direct his hunger some of the time, but otherwise continuing to be controlled by it. Eventually he was discovered by Kohaku who was able to modify the spell, and thus his physiology into a state in which he could have more self control if he wanted, but it was something he had to learn. Thanks to her modifications, Sem was able to grow up a little bit, and strategize methods to better meet his needs. This allowed him to be more than just a hungry monster, and actually explore interests other than food.

While hunting he pissed off 0, a similar but conceptual entity, who fed Sem a pie that made him ill for the very first time, before later temporarily removing Sem's hunger altogether. The result was many first experiances for Sem, but it couldn't last. When the effects wore off, Sem went berserk, overwhelmed by the resulting hunger. In the midst of the event, part of his seal was broken though it ultimately limited the damage he could cause. Sem was detained by that world's anti-supernatural foundation for containment. While Sem was still processing things, he was broken free. In the chaos his seal was actually destroyed causing him to loose all but a sliver of conciousness and revert into a black hole. When Sem came to, he was almost back to normal. 0 had done something to bring Sem back, but Sem's physiology was unstable, changing depending on his mental state and requiring concious effort to maintain. Sem was also primed to become an idea instead of a being, and so slipped into conceptual existance for a time. Sem is still more concept than being, but his stay in that state allowed him to stabalize, to experiance greater periods without hunger, and eventually find a state of being where in which he is comfortable.

Sem can manage his hunger far better than he ever has been able to in the past, and has developed a diverse array of modalities and forms to help him navigate the concept realm, space, and fringe realities, though he has grown an aversion to some earths just in case he finds himself relapsing into a black hole state. After his long journey to his current state of being however, He's grown a considerable amount of self control. He is finally able to finally explore his interests in "magic", "learning", "alchemy" and other things that do not directly involve food. It used to be that Sem's first reaction to new people was to try to eat them. Now he knows better. He can be quite friendly to those he feels he can relate to. He tends to live in the moment, and doesn't mind playing around or having fun. He has a stable job at the tavern where he prepares food and drink, works as a waiter, and more.