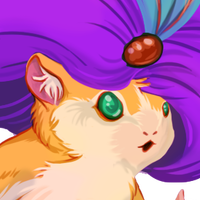 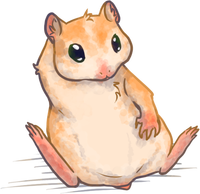 Our orange friend with a youthful appearance, from looking like a young human male with sandy brown hair, an gooey spirit balancing fluidity with flame, or a hamster with dark green eyes. procel is a shapeshifter by nature and changes his form easily on a whim while always havin a few defaults in place. Regardless of the form he takes he tends to be rather recognizable with brown-to-orange coloring on his person and forest green eyes.

An optimist, easy going, a good listener and natural entrapeneur, procel can connect with most people he meets and is more than willing to help while asking for little in return. He's adaptable and generally tries to please, while his promises are steadfast and strong. He offers the best business practices that he can, with the idea, that if you can get something for nothing it's probably a scam. He values hard work, philosophical discussion, knowledge and creativity, which easily shows through in the collection of items and books that he keeps in his shop.

Procel is a natural empath as well. He's sensitive and aware of the emotions of others which sometimes can tire him out. Sometimes his empathy can backfire on him, bringing him into situations which are beyond his skillevel or experience.

Procel sometimes does things for the sake of it, with hobies being along the lines of inventing new wares, exploring places beyond physical existence, gardening, and crafting new items. when he's not acting as a business man, Procel can be found in or outside his shop working on his pet projects. When tired, he tends to revert to hamster form and enjoy snacks such as seed-&-Nut cookies, yogurt drops or nice vegetables, or he can be found napping in one of the many candles and containers he has in his shop. If he doesn't seem home at all, but the door to his shop is open, look for a single lit candle. it might just be him.

Being closer to spiritual beings than flesh, procel can take on many forms, mimicking living things, objects and animals rather easily. These transformations are not always accurate and laws of mass and weight do not always apply.

Procel can grant wishes so long as those wishes are material or influence a single person directly. these wishes come at a cost to the wisher, usually in the form of a little bit of lifeforce, a secret, emotion or magic. He also takes such things as payments for his wares at times

Can transform any object he owns into any other object or thing. This transformation is somewhat dependent on the mass of the object, and cannot add value that the object doesn't already have. for example, rocks cannot be made into food that would have any nutritional value, and poison cannot be made from a non-poison.

Procel can travel to and through other realms and can easily connect to those relms and navigate between space. this allows him to have his shop in multiple places at once, explore dreams and more

Procel has proven to be an effective empath, having a sensitive nature to the moods and whims of others. He is closely attuned to the flow of energy, positive and negative alike, and uses this to inform his craft. A downside of this is that he can easily suffer when exposed to especialy negative energies.

Procel is good at determining the properties of things, and figuring out if someting new to him hs value in his work. When he finds things that might suit his needs, he collects and takes samples of them for further study

Procel is good at shaping wood, metal, stone, cloth and other materials into shapes that help hold his magic. this is not just through his transformative powers but through the use of tools and patience.

ILaajia Shalu is an odd little place feeling like a fortune teller's tent or spirituality club rather than a place to find medicinal cures. The waiting room is small but cosy, filled with benches, blankets, a few magazines, and even complimentary coffee and cookies, or tea and cake depending on the day. The cures are nowhere to be seen. once a client is seen by Procel, and their needs looked into, parts of the room can practically fold in on themselves revealing medicines, teas, creams, and more. The shop can change even more than that depending on the needs of the clients who visit, but it seems to have something for everyone.

sampling of wares and Services

Trivia: Illaaja Shalu is part of a traditional greeting, as a whish for the wellbeing of those it is spoken to.

Born of an insense censer and the prayers and hopes of men, Procel has gone far from that. Once, he used to be as many Djinn, granting wishes to those who asked and letting them live with the consequences, whether to squander their souls or fortune. The censer passed through many hands, for good and for ill, eventually ending up in the ownership of a monarch of a land not unlike a mixutrure of india and persia. A servant in the household gave the Djinn the name Procel, meaning knower of secrets.

As Procel was found by those of more pure heart, he was eventually freed to be his own Djinn, a natural business dealer, he took his skill with magic and made a trade of granting wishes and offering services to others. It evolved from a few wares on a magic carpet, to a traveling cart, to a far more robust business. All the while he studied more, science, magic, lore, and myth, all to hone his skills. Gradually the shop took on the name Illajia Shalu which is a greeting and whish for the wellbeing of those it is spoken to.

Procel has been running this shop for over 50 years in various places in the worlds. He has traveled to dreamlands, physical realities, fantasy places and even the stars. sometimes he does business in multiple places at once. His current shop is a small place with homey living room vibes. Any and all are welcome to stop by, whether for someone to talk to, tea and cookies which are always availible, or to peruse his many wares